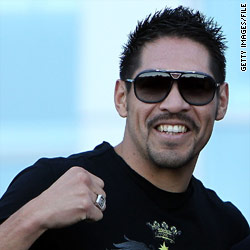 The man who will take on Manny Pacquiao for the junior middleweight title at Cowboys Stadium on Saturday has not fought in the United States in almost two years.

In January 2009, the California Athletic Commission accused Margarito of having a plaster-like substance in the hand wraps under his gloves before a fight with ŌĆ£SugarŌĆØ Shane Mosley, according to The Miami Herald.

Not only did Mosley knock out Margarito in the ninth round, but the commission suspended MargaritoŌĆÖs and his trainerŌĆÖs boxing licenses. Though Margarito says he was unaware the wraps were illegal, the claim has been met with some skepticism.

Though he hasnŌĆÖt fought again in the U.S., the 32-year-old fighter won a match in Mexico six months ago.

This weekendŌĆÖs 12-round Pacquiao fight is in Arlington, Texas, and the boxing commission there has OKŌĆÖd Margarito to fight again.

Margarito, who is 38-6 with 28 knockouts, told The Herald that he tries not to dwell on the negative and ŌĆ£all I am concentrating right now is on the fight. Everything is in the past, and I canŌĆÖt wait until [Saturday].ŌĆØ

Also, Merchant added, Margarito was once ŌĆ£probably the biggest drawing card in the most important boxing audience, the Mexican and Mexican-American audience ŌĆ” At that time he was a really rough hombre and until Mosley came along he was considered the toughest guy on the block.ŌĆØ

ESPN asked several fighters their predictions on the bout, and most seem to believe Pacquiao will prevail in a close fight. That is, except former champ Zab Judah, who just wants to fight the winner.

It appears it has all become too much for AmericaŌĆÖs first openly gay bishop of the Episcopal Church.

Death threats and a life plagued with controversy have taken their toll on the 63-year-old, leading him to announce this week he will be stepping down as bishop in 2013, seven years before the mandatory retirement age of 72.

"The fact is," he said, addressing his parishioners, "the last seven years have taken their toll on me, my family, and you."

Even as he stepped down, criticism of his sexuality and piety continued. A columnist who covers the Episcopal Church and Anglican community described Robinson on Friday as "a man who has led tens of thousands, if not millions, astray with his abominable teachings and sexual behavior."

However, Robinson is no stranger to struggle. His father named him Vicky after being told his newborn son would die. It was the name his parents had chosen for a daughter, as they had not decided on a name for a son.

This made school years difficult for Robinson, who told the Sydney Morning HeraldŌĆÖs Washington correspondent, ŌĆ£'At one point in middle school I looked into changing my name because it was painful to me as a kid."

Through it all, the bishop has been proud of his identity and his roots, he said.

ŌĆ£I do sign my name 'V, period, Gene Robinson,' and every time I do it's a reminder to me of who I am and where I came from," Robinson said.

Following the announcement of his retirement, Robinson insisted in an interview with the Los Angeles Times that he was not "throwing in the towel."

"In no way am I being run off by those who opposed me or the positions that I take," he said.

Robinson said that until his retirement he will remain ŌĆ£absolutely focusedŌĆØ on his ministry in New Hampshire.

The University of Tennessee student convicted of hacking into Sarah PalinŌĆÖs e-mail account will spend a year and a half in prison, he learned Friday.

The 22-year-old son of prominent Democratic state legislator Michael Kernell was found guilty in April of unauthorized access to a protected computer and destroying records to obstruct a federal investigation, according to CNN affiliate WVLT-TV. He was acquitted on a wire fraud charge.

Prosecutors said Kernell changed PalinŌĆÖs e-mail password, read the contents of the account, made screenshots of the directory and posted them on a public website. E-mail addresses, family photos and a relativeŌĆÖs phone number were among the items made public.

After the verdict, Palin said she was ŌĆ£thankful that the jury thoroughly and carefully weighed the evidence and issued a just verdict.ŌĆØ She added that the incident raised concerns about the integrity of political elections, saying her privacy was invaded for political gain.

Palin was a nominee for vice president at the time of the crime.

Despite prosecutors' pushing for prison time, KernellŌĆÖs lawyer contended his actions were more prank than crime and asked a federal judge to sentence his client to probation.

A columnist for Network World said, in his opinion, ŌĆ£a fine, community service and probation would best serve the interests of justice here,ŌĆØ but correctly predicted it was unlikely given the political nature of the case.