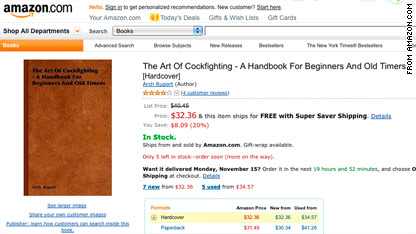 PETA wants Amazon.com to stop selling books such as 'The Art of Cockfighting.'

PETA said it sent a letter Friday to Amazon.com President Jeffrey P. Bezos, asking him to to pull products from the site that promote animal cruelty in light of the online retailer's decision this week to stop selling an e-book that offered guidelines to pedophilia.

"The Pedophile's Guide to Love and Pleasure" was pulled from Amazon.com late Wednesday, after thousands of angry users posted reviews to the listing condemning its publication and vowing to boycott the site.

PETA pointed out two books on Amazon.com, "The Art Of Cockfighting—A Handbook for Beginners and Old Timers" and "Dogs of Velvet and Steel," as examples of titles that encourage people to participate in illegal animal fighting.

"These books encourage people to become involved in dogfighting and cockfighting— cruel and illegal activities that are rampant across the country," PETA executive vice president Tracy Reiman said in the letter to Bezos.

"Animals, like children, depend on us to protect them and put their best interests above profits. Please, don't be complicit in cruelty to animals: Do the right thing and stop selling products that promote criminal violence against living beings."

PETA said the controversy over "The Pedophile's Guide" created the ideal climate for them to highlight animal fighting - an issue that's always on their radar.

"At a time when Amazon is coming out very publicly against books on pedophilia, this is a prime time for Amazon to step up and stop selling books that promote other illegal activity, like dogfighting and cockfighting," PETA spokeswoman Lindsey Rajt told CNN.

In fact, the two issues are "interconnected," Rajt said

"Animal abuse is one of the first warning signs we see in people who turn and direct violence toward people," she said. "This is really important because the twisted whims of people who enjoy watching animals fight to the death is not something Amazon should be catering to. There are greater societal implications."