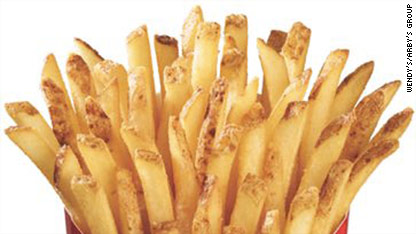 Wendy's new fries leave some of the skin on.

Wendy's is serving up a new kind of fry.

The nation's No. 3 fast-food chain has revamped its french fry recipe for the first time in its 41-year history, leaving the skin on, using a proprietary oil and sprinkling on sea salt.

The new fries, released nationwide Thursday after being test-marketed in three cities, are "designed to give French fry lovers a hotter, crispier taste experience with an enhanced potato flavor and texture," says a press release from parent company Wendy's/Arby's Group Inc. of Atlanta, Georgia.

The new fries are slimmer than their predecessors but contain more calories and salt, according to Opposing Views writer Mark Berman.