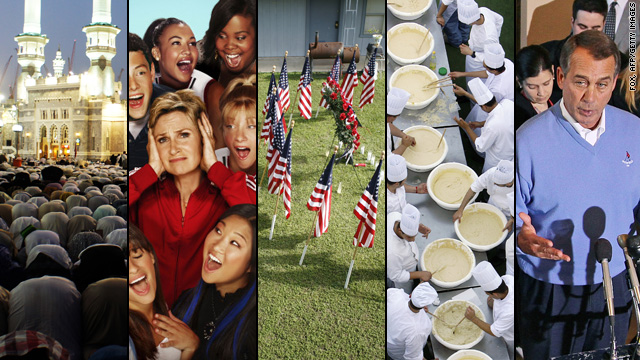 Looking ahead each week, there are some things we know to expect. But when something unexpected comes out of those planned events, that's when things get interesting.

So what's coming up? Several anticipated reports will be released this week; on tap - reports on retail sales, consumer prices, debt reduction and a USDA report on household food security, for starters.

There will be summits and conferences, such as the World Health Organization's Global Forum on Urbanization and Health in Japan. Dr. Sanjay Gupta, CNN‚Äôs senior medical correspondent, will be there to examine the health issues of an increasingly urbanized world -‚Äì pollution, recovery after natural disaster, chronic stress - as well as proposed solutions. Follow CNN Health and CNNI's Urban Planet Special for the latest developments.

A NATO summit beginning¬ÝFriday in Portugal promises to announce a new mission statement to be endorsed by NATO's Alliance Heads of State and Government.

If you're a leader of the internet economy, you might be at Web 2.0, which begins Monday¬Ýin San Francisco, California. Or, if casinos or slot machines are your bag, the weeklong Global Gaming Expo in Las Vegas, Nevada could be for you.

Then, there are events that only come along once in a religious calendar year, such as Hajj, Islam's annual pilgrimage to the holy site of Mecca. More than two million Muslims are expected to make the pilgrimage, which began Sunday in some countries (depending on the sighting of the moon) and lasts about five days.

In the Christian world, Pope Benedict XVI will install 24 new cardinals Saturday into the College of Cardinals, effectively putting his stamp on the body that will select his replacement. Two Americans will be among them, including former St. Louis Archbishop Raymond Burke, who drew attention for being the first to say that he would deny then-presidential candidate John Kerry communion and then continued to raise eyebrows with his comments about Barack Obama and Ted Kennedy's Catholic funeral.

It's hard to say which issues, if any, Congress will take up Monday when it begins its lame-duck session, but a vote on the military's "don't ask, don't tell" policy is possible.

CNN Politics will have the latest from the session, along with the Wednesday's House Republican leadership elections. Virginia's Eric Cantor is expected to become House majority leader and Kevin McCarthy of California is set to become majority whip. Tea Party favorite Michele Bachmann of¬ÝMinnesota is challenging Jeb Hensarling of Texas for the position of House Republican Conference Chair. Ohio Rep. John Boehner is expected to be elected speaker when the House reconvenes in January.

In the category of rarities and firsts, Afghanistan war hero Salvatore Giunta, 25, of Iowa, will make history Tuesday when the Army Staff sergeant becomes the first living recipient of the Medal of Honor since the Vietnam War. At a ceremony at the White House,¬Ý President Obama will present the honor to the self-described "mediocre solider," whose unit was ambushed in Afghanistan in October 2007.

Speaking of firsts and Obama, the president's book for children, "Of Thee I Sing: A Letter to My Daughters," hits bookshelves on Wednesday.¬Ý Obama wrote the book, described as a tribute to groundbreaking Americans historical figures, before he took office in January 2009.

From the house of random, Thursday is Guinness World Records Day, the annual day to celebrate record-setting and record-breaking around the world. Last year, more than 250,000 people from 23 countries broke 43 records on the same day, according to the organization, including most nationalities in sauna, the largest cheerleading dance and the farthest distance blowing a Malteser with a straw.

Harry Potter mania kicks off again this week with the big red carpet premiere of the latest installment in the series, "Harry Potter and the Deathly Hallows." CNN.com will be broadcasting live from the red carpet and following the fan-atics when they start lining up Thursday for midnight shows. If you haven‚Äôt bought your tickets yet, you might want to get on it: The buzz is hundreds of Friday showings have already sold out.

Gwyneth Paltrow made her live singing debut last week at the Country Music Awards, but now it‚Äôs time to see what she‚Äôs really made of on the hit Fox musical dramedy ‚ÄúGlee.‚Äù The actress will appear on Tuesday‚Äôs episode, playing a substitute teacher who performs Cee Lo‚Äôs hit ‚ÄúForget You.‚Äù

How else is "Glee" changing our lives? CNN Living looks at how musically inspired reality shows are generating real-life excitement in high schools experiencing a resurgence of interest in music programs.

As always, America's court dockets will be as busy as ever this week, starting Monday with the resumption of a hearing into last year's Fort Hood shootings. The Article 32 hearing to determine whether Nidal Hassan should proceed to court-martial was adjourned for the anniversary of the November 5 killings, which left 13 dead and 32 wounded.

The ethics trial of U.S. Rep. Charles Rangel, D-New York,¬Ý is also scheduled to start Monday. Rangel temporarily stepped down as Ways and Means Committee chairman following a raft of ethics allegations. Among those allegations - he failed to pay taxes on a home in the Dominican Republic and misused a rent-controlled apartment for political purposes.

As a Utah jury prepares to decide whether Elizabeth Smart‚Äôs accused kidnapper was insane and plagued by religious delusions or a felon who used his purported beliefs to manipulate others, CNN's Belief Blog will examine the sometimes blurry line between faith and delusion.

The young man nicknamed Washington's "barefoot bandit" is set to appear in Seattle federal court Thursday for an arraignment on charges related to his alleged time on the run from authorities. Colton Harris-Moore, 19, gained notoriety for allegedly stealing a boat and two planes and flying without a pilot's certificate - sometimes without shoes.

On Friday, the man who hijacked Pan Am Flight 281 in 1968 will be sentenced in Manhattan federal court. Luis Armando Pena Soltren redirected the plane to Cuba, where he remained a fugitive until he voluntarily returned to the U.S in 2009 to face charges.

On Thursday,¬Ý the NASA Goddard Space Flight Center in Greenbelt, Maryland, invites reporters to participate in a special media day that will highlight NASA's Sample Analysis at Mars (SAM) instrument suite set to explore the surface of Mars from the Curiosity rover.

Stargazers will be on the lookout for the Leonid meteor shower, which will offer the best viewing this year two to three hours before dawn on November 17 and 18, according to the editors of StarDate magazine.

Photo of the week: Aung San Suu Kyi's supporters at the National League for Democracy headquarters in Yangon, Burma.

Myanmar's ruling military junta freed democracy activist Aung San Suu Kyi from house arrest to a throng of joyous supporters who rushed her house once the gates were opened. The 1991 Nobel Peace Prize recipient had spent 15 of the past 21 years under house arrest for her dogged opposition to authoritarian rule in the nation formerly known as Burma.

The Democratic leadership fight for the No. 2 slot in the new House minority ended with Speaker Nancy Pelosi striking a deal that would make current House Majority Leader Maryland Rep. Steny Hoyer the Democratic whip. South Carolina Rep. James Clyburn agreed to end his bid for that spot and instead hold a new, third-ranking leadership post that will be created for him. In a letter to Democratic colleagues on Saturday, Pelosi said she plans to designate him "assistant leader."

Jim Davis, the creator of the widely syndicated "Garfield" comic, issued an apology for an ill-timed strip that ran on Veterans Day. The strip, which appeared in newspapers nationwide Thursday, shows a spider's thoughts as Garfield the cat is about to crush it with a rolled-up newspaper.

The search for missing 10-year-old Zahra Baker ended with the discovery of remains believed to be hers, police in Hickory, North Carolina, said Friday. The girl's stepmother reported Zahra missing on October 9.

Some 3,300 Carnival cruise ship passengers left the ship after the three-day ordeal that began with a fire in the ship's engine room Monday, leaving the ship without power. Passengers endured three days without air conditioning, hot showers or decent meals; instead, they had to settle for Spam and Pop-Tarts dropped off by a U.S. Navy aircraft carrier.

The self-published e-book, "The Pedophile's Guide to Love and Pleasure," was pulled from Amazon.com, a spokesman confirmed. Thousands of users posted angry comments and threats to boycott the site.

Elizabeth Smart led the jury in her accused kidnapper's trial through what she called "my nine months in hell," from being snatched from her bed at knifepoint to becoming a slave to a man who called himself a prophet but really just used religion to justify his appetite for sex, drugs and alcohol, she said.

Scotland Yard revealed that an explosive device found in a cargo plane in England last month probably would have exploded over the Eastern Seaboard of the United States if it had not been discovered. Al Qaeda in the Arabian Peninsula, the Yemen-based arm of the al Qaeda terrorist network, claimed responsibility for the plot to send explosive devices on cargo planes bound for the United States.

For 10 weeks, Mark Haub, a professor of human nutrition at Kansas State University, ate sugary cakelets and Doritos chips every three hours, to prove his theory that in weight loss, pure calorie counting is what matters most and not the nutritional value of the food. The result? He says he lost 27 pounds.

A man convicted of killing three members of a Connecticut family in a brutal 2007 home invasion should die for the crime, jurors decided after nearly 18 hours of deliberation. Steven Hayes, 47, was convicted¬Ýin October of 16 charges, including nine counts of murder and capital murder and four counts of kidnapping. Jennifer Hawke-Petit, 48, and her daughters, 17-year-old Hayley Petit and 11-year-old Michaela Petit, died in the attack.

The Duke and Duchess of Sussex will no longer use the titles His and Her Royal Highness after announcing they would‚Ätwitter.com/i/web/status/1‚Ä¶dO
cnni

2:00 pm ET January 18, 2020 RETWEET
Italian authorities have confirmed a painting found hidden in the wall of a Piacenza art gallery is the long-lost "‚Ätwitter.com/i/web/status/1‚Ä¶FN
cnni

2:00 pm ET January 18, 2020 RETWEET
Iran will send to Ukraine the black boxes of a Ukrainian airliner that its military accidentally shot down this mon‚Ätwitter.com/i/web/status/1‚Ä¶jk
cnni

1:45 pm ET January 18, 2020 RETWEET
The new US Space Force has revealed its new utility uniform, and it's bound to look familiar cnn.it/2NCAUaf
cnni

1:26 pm ET January 18, 2020 RETWEET
A clock counting down to the second the UK leaves the EU on January 31 will be projected onto the bricks of Downing‚Ätwitter.com/i/web/status/1‚Ä¶F9
cnni