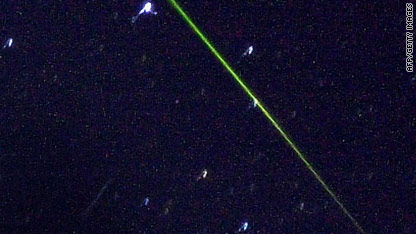 A meteor streak photographed in Sherborn, Massachusetts, during the 2001 Leonid meteor shower.

Skygazers will have the best opportunity to witness the Leonid meteor shower in the two to three hours before dawn on Wednesday and Thursday, according to the editors of StarDate magazine.

If skies are clear, viewers should expect to see at least 20 meteors per hour, the magazine said.Â The nearly full Moon will set several hours before dawn, so viewers won't have to worry about it washing out meteors as dawn approaches.Â

The name Leonid comes from the constellation Leo, which appears to be the source of the meteor shower. It turns out that Leonids are actually bits of debris from the Comet Tempel-TuttleÂ that are left behind asÂ the comet orbits the Sun. The amount of visible meteors depends on where Earth passes through the comet's debris trail.

Former US President Donald Trump and his allies barrel ahead with election lies cnn.it/3uhIR8C
cnni

7:49 pm ET September 27, 2021 RETWEET
The Santa Ana winds will be increasing for Southern California this week. This could mean more fires for the southeâ€twitter.com/i/web/status/1â€¦Ye
CNNweather