The dog, Target,┬Ā was recently brought over from Afghanistan by a soldier who had returned from his tour of duty.┬Ā Target was featured by CNN for heroism after saving dozens of soldiers from a suicide bomber on February 11.

"She got her name because the Afghans we lived with were constantly trying to off her.┬Ā She's been shot in the leg. ... The Afghans actually ran over her," Sgt. Christopher Duke said, who helped care for Target in Afghanistan and has adopted her packmate Rufus.┬Ā "There's no killing this dog for sure.┬Ā She's pretty much been through it all, " he said upon their reunion in July in Georgia.

Target's new owner, Army Sgt. Terry Young whose life was saved by the stray, helped bring the 2-ish-year-old from Afghanistan to her new home in Arizona.┬Ā She disappeared from Young's home on Friday.┬Ā Facebook postings requested help in finding her. 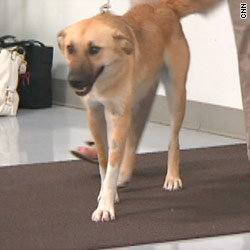 Animal Care and Control received a call about a stray female shepherd-mix dog in the San Tan Valley area on Friday.┬Ā An animal control officer picked up the dog and brought her to the shelter where the dog stayed over the weekend.┬Ā The dog was not microchipped or licensed with the county,┬Ā shelter officials said.

On Monday morning, the employee mistakenly took the dog out of its pen and euthanized it.┬Ā The dog was not scheduled for euthanasia.

ŌĆ£I am heartsick over this.┬Ā I had to personally deliver the news to the dogŌĆÖs owner, and he and his family are understandably distraught,ŌĆØ said Animal Care and Control Director Ruth Stalter.┬Ā ŌĆ£We work hard get to strays reunited with their owners.┬Ā When it comes to euthanizing an animal, there are some clear-cut procedures to follow.┬Ā Based on my preliminary investigation, our employee did not follow those procedures.ŌĆØ

In an e-mail, Young told┬Ā CNN affiliate KPHO, "I'm an absolute wreck today, and it's everything in my power to hold it together for me and my family. My 4-year-old son just can't understand what is going on with Target and keeps asking me to get the poison out of her and bring her home. They don't want her to go be with God yet."

ŌĆ£An investigation is under way, and we will cooperate fully.┬Ā We will also thoroughly review procedures to ensure that something like this does not happen again,ŌĆØ Stalter said.┬Ā ŌĆ£This is unacceptable, and no family should be deprived of their companion because procedures were not followed.ŌĆØ

Target was pregnant when she helped thwart the suicide bomber by attacking him.┬Ā She had her litter of puppies in Afghanistan.┬Ā Target's puppies have since been brought to the United States.

UK start-up Small Robot Company is bringing autonomous farming to life with robots that can identify and preciselyŌĆtwitter.com/i/web/status/1ŌĆ”PJ
cnni

5:01 am ET September 26, 2021 RETWEET
The US Space Force, the newest branch of the US military, has unveiled a new uniform prototype for its members, knoŌĆtwitter.com/i/web/status/1ŌĆ”Mt
cnni

4:01 am ET September 26, 2021 RETWEET
27-year-old Nathan Paulin walked a 600-meter slackline from the Eiffel Tower to the other side of the Seine river iŌĆtwitter.com/i/web/status/1ŌĆ”jC
cnni