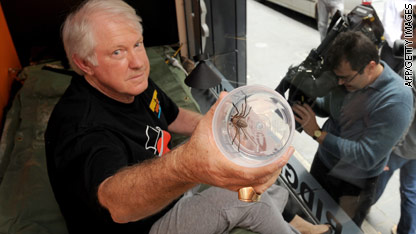 Nick Le Souef is living with dangerous spiders for three weeks for charity.

Forget bedbugs in New York, imagine dealing with deadly spiders - 400 of them everywhere.

Now, picture waking up each day surrounded by them for three weeks while living in the confines of a storefront window.

It may sound like something only a crazy person would do - but it's actually all a part of Nick Le Souef's plan to help a charity.

The Melbourne man, who by the way told reporters he doesn't "like spiders all that much," is being dubbed Australia's very own Spiderman for his attempt to break a record he set 30 years ago - and raise $50,000 for a children's charity.

"I'm not afraid of them, but it's just that I'm not overly keen on them," the 67-year-old told the Australian Broadcasting Company.

Le Souef originally planned to do the stunt with snakes but was not allowed.

According to Australian media reports, the number of creatures has dwindled a bit after some began to turn on each other - a sign things may get more difficult for him, some say.

Le Souef says the incident doesn't worry him and he isn't afraid of being surrounded by the dangerous blackhouse, redback and huntsmen spiders.

"Redbacks are very calm," he said. " Once they make their webs and their sort of little nests, they don't move around," he said.

Seoul's former mayor died last year in an apparent suicide after his secretary accused him of sexual harassment.â€twitter.com/i/web/status/1â€¦zT
cnni

6:31 am ET January 27, 2021 RETWEET
AstraZeneca is pushing back strongly against criticism from EU officials over delayed deliveries of its Covid-19 vaâ€twitter.com/i/web/status/1â€¦IK
cnni

6:16 am ET January 27, 2021 RETWEET
The only surviving prototype of this unusual plane now sits dilapidated in a field near Moscow, but it was once theâ€twitter.com/i/web/status/1â€¦dg
cnni

6:01 am ET January 27, 2021 RETWEET
Apple is urging iPhone and iPad users to promptly update their operating systems to fix security bugs that may haveâ€twitter.com/i/web/status/1â€¦E6
cnni

5:45 am ET January 27, 2021 RETWEET
Sanofi will fill and pack millions of doses of Pfizer's Covid-19 vaccine from July in an effort to help meet the huâ€twitter.com/i/web/status/1â€¦aQ
cnni