At least 6 people have been killed and two dozen injured in a shooting at a Fourth of July parade in a Chicago subuŌĆtwitter.com/i/web/status/1ŌĆ”PE 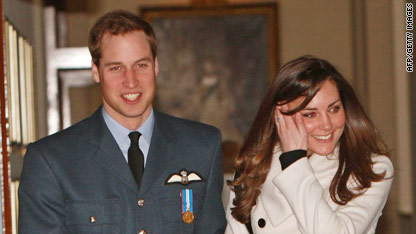 Prince William and Kate Middleton are engaged to be married.

Talk about a royal obsession.

Call it another British invasion, or whatever you'd like, but it's clear that in the U.S. we just can't get enough of the Brits. And with the announcement that Prince William will wed his longtime girlfriend, Kate Middleton, America once again is gawking and perhaps even stalking everything that says "Royal Wedding."

The news has dominated the Twittersphere and Web - with four of the top trends belonging to the newly engaged couple. It almost makes you wonder why we ever split with the Brits.

Whether it's the Beatles (and the announcement that the Fab Four's┬Āmusic will finally be on iTunes,) other pop icons (Leona Lewis, Duffy and Amy Winehouse) or the wedding announcement - Americans┬Āare still trying to gobble up every detail about our friends across the pond. We did it with Prince Charles and Princess Diana, and it seems we will again with this wedding and future marriage.’╗┐’╗┐

Readers are looking for every detail about Middleton, known as the middle-class princess, and what married life might be like for her and William, the second in line to the British throne and an action hero.

The two are on the front pages and part of full coverage sections of US Weekly, People, the┬ĀNational Enquirer and a slew of other American tabloids. WeŌĆÖve watched with bated breath their every move and photograph,┬Āand it's gone into overdrive┬Āwith news of their engagement. And that includes the field of betting. Paddy Power has put out an array of things for┬Āpeople to wager on, including when the couple will marry, where the wedding will take place and even what color Queen Elizabeth's hat will be or how long Middleton's train will be.

News of the impending wedding bells┬Āspread like wildfire online, and no doubt British sites have been swamped with traffic from American readers.

More than three British papers or tabloids and the BBC are live-blogging the announcements, with up-to-the-minute reaction, columns and reader comments. Six of the BBC's top stories Tuesday are in some way about the William and his future bride. The Daily Telegraph is asking readers to offer their own tributes to the couple.

Considering you all can't seem to help yourself - we figured we'd┬Āhelp you navigate the royal media┬Āmadness by picking out the best, the hilarious and the most bizarre stories.

"Kate will be 'oldest Royal bride' " - The Daily Telegraph

"The Royal romance that captivated a nation: How Wills and Kate kept us guessing for eight long years" - The Daily Mail

A look at Kate

"How does Kate compare to Princess Diana - The Daily Telegraph

"Is this the new People's Princess? How confident Kate Middleton compares to 'Shy Di' " - The Daily Mail

"Kate Middleton will inherit a host of titles" - The Mirror