As Medal of Honor recipient, Iowa soldier in rare company 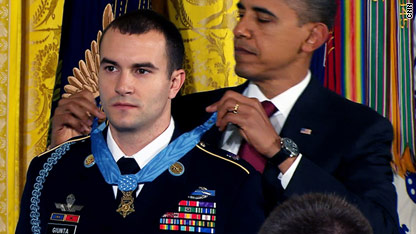 A 25-year-old U.S. Army staff sergeant from Iowa on Tuesday became the first living recipient of the Medal of Honor from the war in Afghanistan.

President Obama awarded the nation's highest medal of valor to Staff Sgt. Salvatore Giunta - the kind of soldier who leaves you "just absolutely convinced this is what America's all about," Obama said at the White House award ceremony. "It just makes you proud."

Giunta was a specialist serving with the Airborne 503rd Infantry Regiment on his second tour of duty in Afghanistan when his unit was attacked on the night of October 25, 2007. According to Defense Department documents, Giunta and his fellow soldiers were walking back to base along the top of a mountain ridge when the enemy attacked from their front and their left. Taliban fighters barraged the Americans with AK-47s, rocket propelled grenades and Soviet-era large machine guns.

Giunta saw several of his fellow soldiers go down. He ran forward, throwing grenades and returning enemy fire, to help one soldier who had been shot but was still fighting, the documents say. Then he noticed one of the wounded soldiers was missing.

Searching for his wounded friend Sgt. Josh Brennan, Giunta ran over a hill where moments before Taliban fighters had been shooting at him. Now he was alone, out of sight of his fellow soldiers, in an area that the Taliban had controlled just moments before.

The death of Michelle Go, who was pushed to her death in front of a Times Square subway train, jolted Asian Americaâ€twitter.com/i/web/status/1â€¦j3
cnni

7:12 pm ET January 20, 2022 RETWEET
Singer Adele has announced the postponement of her Las Vegas residency, one day before it was set to kick off, sayiâ€twitter.com/i/web/status/1â€¦fe
cnni