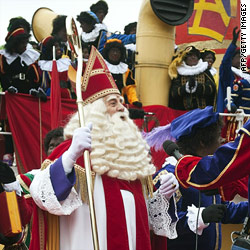 Most of the chocolate letters distributed by Sinterklaas in the Netherlands this year will be made of fair-trade cocoa, Oxfam Novib says.

Sinterklaas - that's Santa Claus to Americans - has gone green in the Netherlands.

Giving large chocolate alphabet letters is a Dutch yuletide tradition. Sinterklaas leaves children's initials hidden in shoes and other surprising places, and bosses give them to employees.

Oxfam Novib, the Dutch branch of Oxfam International, started a campaign in 2007 to encourage people to give letters made with fair-trade chocolate.

Traditional chocolate production has exploited children's labor, including child trafficking. In the Ivory Coast alone, 150,000 children, 12,000 of whom have been trafficked, work in cocoa production under horrific conditions, according to Oxfam Novib.

Five major grocery store chains and one of the Netherlands' leading producers of chocolate, Royal Verkade, have joined the campaign. The result: 96 percent of the 23 million letters that will be bought by December 5 (the day the Dutch celebrate Sinterklaas), will be made from all or partially sustainable products, Oxfam Novib says, according to De Telegraaf. Last year, just 15 percent were, Oxfam says.

People who received different Covid vaccine types in each dose appear to be more likely to experience mild side effâ€twitter.com/i/web/status/1â€¦JQ
cnni

9:50 pm ET May 12, 2021 RETWEET
Local officials in Texas unanimously passed a resolution on Tuesday calling for a posthumous pardon for George Floyâ€twitter.com/i/web/status/1â€¦QK
cnni

8:50 pm ET May 12, 2021 RETWEET
Howard University has announced that alunma Phylicia Rashad has been appointed dean of the recently reestablished Câ€twitter.com/i/web/status/1â€¦H4
cnni