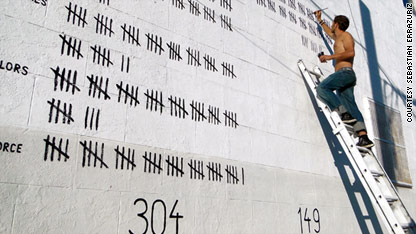 Sebastian Errazuriz used the side of his Brooklyn studio to highlight military suicide.

A New York-based artist is using a wall as his canvas to draw attention to the suicide rate among U.S. troops.

The simple exhibit, titled “American Kills,” compares U.S. military suicides in 2009 to the number of troops killed in the Iraq War over the same time period.

Sebastian Errazuriz, 32, used a series of black strokes on the outside of his white-cinderblock Brooklyn studio so that passersby can see at a glance the disparity between the death tolls.

“The counting of dead soldiers outside my studio was long and surprisingly eerie; it was hard to forget that every brush stroke was a soldier who had died the previous year,” Errazuriz said on his website.

The Chilean-born artist, who says he often leans on the “the dichotomies of life and death” in his art, came up with the idea after perusing Internet sites about war. He discovered there were more than twice the number of suicides in the military (304) than there were U.S. troop deaths during the Iraq War in 2009.

(Errazuriz’s sources peg the latter number at 149, while CNN’s war casualty database has a tally of 150).

Errazuriz had never heard the statistic before. He was shocked as well to learn the number of suicides rivaled the number of U.S. troop deaths in Afghanistan that year.

He first announced the statistic on Facebook, but it elicited little response so “he bought a can of black paint and decided to ‘post’ the news in the real world,” his website explains.

With a ladder and a paintbrush, he proceeded to make a black stroke for every dead soldier, categorizing them by the branch of the armed forces in which they served. 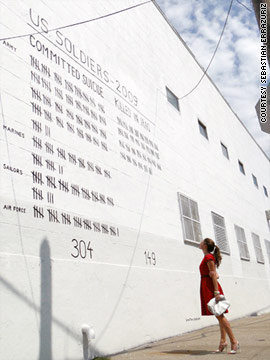 “A lot of people stopped to read the mural and were immediately impressed by the reality portrayed,” Errazuriz said.

“I tried to explain that I simply wished to create a physical image that could capture people's imagination, creating awareness of the current numbers in death, war and the infinite discrepancy between the resources and energies destined to fight and protect soldiers at war versus the energies invested in protecting their mental health
and stability.”

Suicide in the U.S. military is a growing concern, and the recent “startling increase” in the U.S. Army prompted a $50 million study last year by four universities and the National Institute of Mental Health, according to Columbia University.

Dr. Robert Ursano, head of the project and director of the Uniformed Services University of the Health Sciences' Center for Traumatic Stress Studies in Bethesda, Maryland, told Psychiatric News last year that the study – the largest-ever military study of suicide and mental health – represented the first partnership of its kind.

“This is a unique joining of the Department of Defense and the NIMH to address an issue of national security that will also build tools with peacetime implications,” Ursano said.

Errazuriz routinely finds unorthodox means to present his art and last year worked with 40 volunteers to plant 1,100 crosses in a waterside park in Brooklyn to illustrate the number of people who die in New York City each week.

He’s also created furniture and sculptures and designed clothing, including sexy dresses made of latex gloves or zippers and a fur coat made of teddy bears.