Professor to implant camera in the back of his head 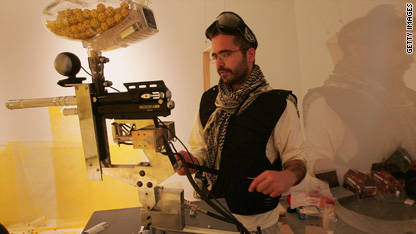 Professor Wafaa Bilal, known for his eyebrow-raising experiments, like having people shoot paintballs at him over the Internet, has a new idea sparking concerns.

Remember when your mom warned you she had eyes in the back of her head? She might have been onto something.

Because a New York University professor is doing exactly that - surgically implanting a camera in the back of his head in the next few weeks. Why? It's art, duh.

Professor Wafaa Bilal, who works at NYU's Tisch School of the Arts' photography and imaging department, is causing a stir because of his artistic experiment raises privacy concerns.

Bilal, who has a countdown on his website for the project - dubbed 3rdI - will have images from the camera broadcast live from the back of his head to an exhibit in a museum in Qatar scheduled to open in December.

The camera, which will be the size of a thumbnail, will be attached using a method similar to piercing, according to The Wall Street Journal, which spoke to Bilal's colleagues familiar with the project.

The artistic endeavor is "a comment on the inaccessibility of time and the inability to capture memory and experience," according to the Mathaf: Arab Museum of Modern Art, where the installation will be displayed.

The Journal reports that Bilal will have the camera in his head for a year, and it will take pictures in one-minute intervals.

What will museum visitors see? Well, that depends on Bilal's travels, which is where the controversy comes in. Questions have been raised as to whether he will have the camera on while he teaches at NYU and whether students' privacy may be invaded. NYU is looking into the issue.

"As a school of the arts, a school whose mission is to educate artists, we place a high value on his right to free expression in his creative work as an artist, and take that principle very seriously," NYU Spokesman John Beckman said in a statement. "But as a school of the arts, we also take seriously the privacy issues his project raises, its impact on our students and the importance of preserving trust in the pedagogical relationship between a faculty member and students.

“There have been numerous conversations since Professor Bilal informed us of his project as we sought to find the right balance; we think they have been constructive and productive. We continue to discuss with him the right mechanism to ensure that his camera will not take pictures in NYU buildings.”

This isn't the first time the Iraqi artist's experiments have caught people's attention.

His work "Domestic Tension," where he stood in front of a paintball gun and allowed people to shoot him over the Internet 24/7, caused widespread buzz online.

His controversial video game piece, “Virtual Jihadi,” ended with a lawsuit from the American Civil Liberties Union. Bilal hacked a video game and put an avatar of himself in the game and then appeared as a suicide-bomber hunting Former President George W. Bush.