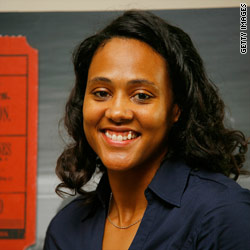 Athlete Marion Jones' book gives her version of her drug scandal and time in prison.

The American track star won three gold and two bronze medals at the 2000 Olympics in Sidney, Australia, but relinquished them when news emerged that she had used performance-enhancing drugs.

Jones spent six months in federal prison for lying to investigators. She now plays guard for the Tulsa Shock of the WNBA and recently released "On the Right Track," in which she gives her version of events and describes her time in prison.

Filmmaker John Singleton has made a documentary about Jones titled "Press Pause," airing on ESPN.

The Wall Street Journal's Speakeasy blog says it had a hard time getting a straight answer out of Jones when it pressed her on whether she knew she was taking performance-enhancing drugs.

In an interview on "The Daily Show," Jones stated that she trusted her inner circle of advisers and trainers and did not know until 2003 that she had been given performance-enhancing drugs in 2000.

In both interviews, she admitted lying to investigators, which was the crime that sent her to prison.

"It's against the law to lie to federal investigators and I did it. I own it," she told Speakeasy.

Jones now says she wants to focus on prison reform, using her experiences behind bars as examples of what's wrong with the system.

Ireland's banking industry is in trouble, and Finance Minister Brian Lenihan has resisted a bailout from the other euro-zone countries and the International Monetary Fund.

However, as European finance ministers meet to try to keep Ireland from becoming the next Greece, Lenihan sounds as if he's ready to put national pride aside.

"We share our sovereignty with Europe in relation to currency," he told the Telegraph. "We don't have our own currency. You have to act with your partners in whatever steps you take. It's not the question of wanting or not wanting. It's the question of identifying the problem in an urgent way and dealing with it."

Negotiations with an EU-IMF team begin Thursday. One item that might be on the table is Ireland's low corporate tax rate, which neighbors believe undercuts them, according to the Telegraph.

Lenihan has overseen sharp budget-cutting since taking office in 2008, and has been seen as a possible successor to Prime Minister Brian Cowen, according to a Reuters profile.

The North Carolina congressman is challenging Nancy Pelosi for leadership of the Democratic caucus in the House.

Shuler is whip of the Blue Dog Coalition, a group of fiscally conservative Democrats in Congress. He was elected to represent North Carolina's 11th District in 2006.

Before that he was a businessman, but is best known as an All-American quarterback at the University of Tennessee who came in second in balloting for the Heisman Trophy in 1993. (Florida State's Charlie Ward won.) Shuler had an undistinguished five-year career with several NFL teams.

In announcing his challenge of Pelosi for minority leader, Shuler said the party needs to change direction.

"We have to be able to recruit in moderate districts to win back the House, and that's where we have to be successful in order to win in 2012," Shuler said.

Shuler's effort to displace Pelosi is seen as largely symbolic.

While airline passengers and pilots are objecting to full-body scans and intimate pat-downs, it's John Pistole, the head of the Transportation Security Administration, who's under scrutiny.

Pistole is testifying Wednesday before the Senate Committee on Commerce, Science and Transportation about TSA's security efforts.

Pistole told CNN on Monday that the TSA is "trying to be sensitive to individuals' issues and concerns," but added, "the bottom line is, everybody who gets on that flight has been properly screened."

Pistole was sworn in as TSA administrator in July after a 26-year career with the FBI, where he was deputy director.

According to his TSA bio, Pistole received the FBI's 2007 Edward H. Levy Award for Outstanding Professionalism and Exemplary Integrity. In 2005 he received the Presidential Rank Award for Distinguished Executive.

Before joining the FBI, Pistole was an attorney in private practice in Indiana.