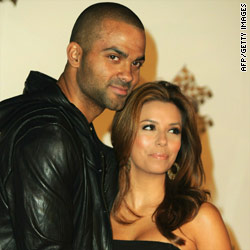 Tony Parker is making news, and not for his 21 points against the Chicago Bulls on Wednesday night. The San Antonio Spurs point guard and his wife, actress Eva Longoria, have called it quits after seven years of marriage, citing irreconcilable differences, though Parker is rumored to have cheated.

Granted, it's not the most shocking development in athlete-celebrity relations. There are plenty of hookups, divorces and everything in between when these two worlds collide. But what does make this story a little more intriguing is the identity of the alleged "other woman."

Chicago Bears vs. Miami Dolphins (8:20 p.m., ET) - Down to their third-string quarterback, the Dolphins face an uphill battle against the Bears at Sun Life Stadium. But don't underestimate Tyler Thigpen. With 20 touchdowns and 16 interceptions, Miami could have a lot worse to work with.

17 - age of Juan Agudelo, the youngest member of the United States national soccer team to score a goal in the modern era. Just six days away from his 18th birthday, Agudelo scored his historic goal during a friendly against South Africa.

82 - number of games Greg Oden has played in since making his NBA debut four seasons ago. The Trail Blazers center will miss the rest of the season after undergoing microfracture surgery on his left knee Friday. SI.com's Zach Lowe discusses Oden's future in Portland on his blog, The Point Forward.

11 - number of consecutive games the New York Islanders have lost. Their most recent disappointment came against the Tampa Bay Lightning on the night of new coach Jack Capuano's debut.