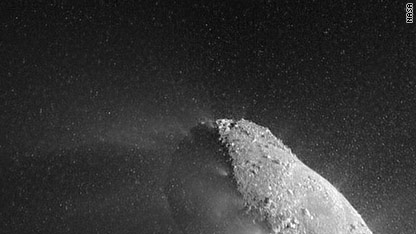 Rudolph's nose may get a workout if Santa's sleigh passes anywhere near comet Hartley 2.

Some of the crystals could be the size of basketballs, NASA said in an article on its website.

"We've never seen anything like this before," University of Maryland professor Mike A'Hearn, principal investigator of Deep Impact's EPOXI mission, said in the article. "It really took us by surprise."

The "snow" cloud is dozens of kilometers across, much larger than the nucleus, which is about 2 kilometers wide, NASA said.

The crystals are light and fluffy like high-mountain snow, science team member Jessica Sunshine of the University of Maryland told the website.

But even a fluffy snowball can do serious damage to a spacecraft traveling 27,000 mph, according to NASA.

"Fortunately, we were out of harm's way," A'Hearn told the site.