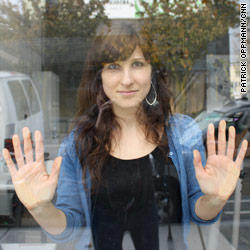 Every time you tweet, Facebook chat or Skype, you're essentially taking part in a social media experiment - but Cristin Norine is taking the idea to a new level.

She is putting herself behind glass walls for 30 days as part of the Public Isolation Project that shows how technology cuts people off from each other - even if it seems like it is connecting them.

"I'm seeing how it's affecting my relationships," she said.

It's also left her completely open to public view and scrutiny, but for the most part, Norine said she's been encouraged by others.

Norine said many people have stopped by and left her messages. She told CNN she was getting tired of seeing people texting while she was with them all the time - or having conversations with her friends only via technology.

Not that Norine is the first person to try and make a point by living in a glass house and throwing metaphorical stones.

A similar glass house project in Santiago, Chile, sought to showcase the basics of day-to-day life, by having a woman living behind glass walls. That project, however, caught a bit more attention, when the woman began to take a shower in public view.

Norine, however, doesn't have that issue - the small bathroom is the only area where she's off public display.

Talk about crossing something off of your bucket list.

Thomas Lackey, who is 90 years and five months old broke a record for Guinness World Record Day 2010 by becoming the oldest person to wing walk across Cirencester, Gloucestershire. The photos of Lackey on top of the plane (and the rest of the records broken for the day) are must-sees.

Lackey's no stranger to the record books - at age 85, he became the oldest person to be strapped onto the top of a plane, while it "looped the loop."

The widower told the BBC that when he's up there he has the strongest motivation.

"When I'm up in the sky I mainly think of my wife," he told the BBC. "I always carry a photo of her, I think of her and try to think what she would think of me."

Lam has skyrocketed to fame in recent days after the media picked up on his white iPhone 4 do-it-yourself conversion kit.
On his site whiteiphone4now.com, Lam sells how-to-instructions and parts to convert your iPhone 4 into the coveted "white version," which Apple hadn't planned to unveil reportedly until the Spring. How did he do it? A relationship with Apple's manufacturer overseas apparently.
"I knew a guy from a few years back that had somewhat of a relationship with folks in Foxconn," Lam told The New York Observer by email.

Lam said he started the website in response to all the spam he got about iPhone replacement parts, so it gave him an idea - but he had no idea it'd get the attention it did. According to media reports, Lam has made as much as $130,000 from the site.

Now, he has caught the attention of Apple, which is reportedly taking it personally. Lam's lawyer told The Observer they are waiting to hear from the company.

"I'm feeling pretty stressed, knowing it's the Almighty Apple who is coming after me," Lam told the Observer.