Some Haitians who crossed the Texas border are being allowed into the US despite claims from Homeland Security offiŌĆtwitter.com/i/web/status/1ŌĆ”AY

SI.com: Tiger steps back into the spotlight 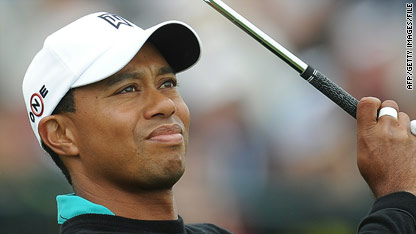 Tiger Woods says he wants to reconnect with fans.

Almost one year since his infamous Thanksgiving night accident and 14 years since his iconic first Nike ad, Tiger Woods is saying "hello" to the world again.

Following the downfall of his marriage, No. 1 world ranking and public image in a 12-month whirlwind, Woods is beginning to emerge from his self-induced exile and attempting to reconnect with his fans.

Although Woods has played in golf tournaments and held some awkward press conferences over the past few months, he has yet to appear comfortable being himself with the cameras watching.

But with his personal life self-reportedly in order, Woods says he wants to reconnect with fans and thank them for sticking with him through tough times.

In the past week, Woods has made several moves to show he's ready to return. He wrote an op-ed piece in Newsweek titled "How I've Redefined Victory" and explained his rededication to his family.

He went┬Āon ESPN's "Mike & Mike in the Morning" and proclaimed his life was more "blessed and balanced" than before. And he even opened a Twitter account to hear from his fans and attempt a few swings at humor.

It's yet to be seen if Woods can be the golfer and public figure he once was, but if there's one consistent message in his recent public outputs, it's that he's determined to be a better dad.

"I can never truly repair the damage I've done, especially to my family," Woods wrote in his Newsweek essay. "But I can keep trying. ... I'm not the same man I was a year ago. And that's a good thing."

Here's the action to watch tonight (all times Eastern):

The Thunder look to avenge their November 7 loss to the Celtics when they travel to Boston to take on the rested Celtics, who are 5-0 at home this season.

Both teams recently had four-game winning streaks snapped. Tonight, the┬ĀMavericks host the Bulls in Dallas, where they have gone 12-1 against the Bulls over the last dozen years.

Boise State (9-0) looks to continue its ascension of the BCS standings when it hosts Fresno State (6-3), which nearly upset No. 18 Nevada last week.

$450,000,000 - Amount Joe Lacob, Peter Guber and partners paid for the Golden State Warriors, $49 million more than has ever been paid for an NBA franchise.

700 - Franchise victories for the Chicago Bears with their 16-0 win over the Miami Dolphins on Thursday night. The Bears are the first NFL team to reach 700 wins.

Women who have been sexually assaulted have a higher risk of developing a type of brain damage that has been linkedŌĆtwitter.com/i/web/status/1ŌĆ”Xd
cnni

12:21 pm ET September 22, 2021 RETWEET
Chaotic scenes broke out at Haiti's main airport on Tuesday after migrants who had been deported from the United StŌĆtwitter.com/i/web/status/1ŌĆ”sY
cnni

12:09 pm ET September 22, 2021 RETWEET
Netflix says it has acquired the rights to Roald Dahl's stories and plans to create a "unique universe" of productsŌĆtwitter.com/i/web/status/1ŌĆ”Fy
cnni