The supermarket shooting suspect made a threat while attending high school last year and was sent for a mental healŌĆtwitter.com/i/web/status/1ŌĆ”Hz

Sweden's Social Democratic Party has decided the country should work toward a Swedish application to join NATOŌĆtwitter.com/i/web/status/1ŌĆ”lW

The FBI is launching a hate crime investigation as local officials call the shooting that left at least 10 people dŌĆtwitter.com/i/web/status/1ŌĆ”Tq

At least 8 people are dead and a suspected shooter is in custody after a mass shooting at a Buffalo, NY, grocery stŌĆtwitter.com/i/web/status/1ŌĆ”4Y 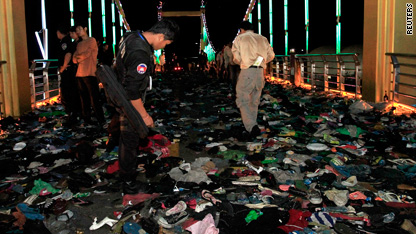 Military police examine the bridge where a stampede took place in Cambodia.

[Updated at 4:25 p.m.] Steve Finch, a Phnom Penh Post reporter, told CNN that the stampede at the water festival in Phnom Penh began around 10 p.m. Monday (10 a.m. ET), when police began firing a water cannon onto a bridge to an island in the center of a river.

The bridge was packed with people, and police fired the water cannon in an effort to get them to move, he said.

"That just caused complete and utter panic," he told CNN in a telephone interview. He said a number of people lost consciousness and fell into the water; some may have died by electric shock, he said.

Watch: "It was chaos," reporter says

Finch cited witnesses as saying that the bridge was festooned with electric lights, which may have played a role in the deaths.

The government denied anyone died by electric shock.

But a doctor who declined to be identified publicly said the main cause of death was suffocation and electric shock. Police were among the dead, he said.

While Finch said the incident apparently coincided with the firing of the water cannon, a witness, Ouk Sokhhoeun, 21, told the Phnom Penh Post that the stampede began first.

In addition to the 339 people who have been confirmed dead, 329 people were injured, Prime Minister Hun Sen said, according to The Phnom Penh Post.

The incident happened on the final day of the three-day festival, according to The Phnom Peng Post. The┬Ā festival, which┬Āattracts people from all over Cambodia, is held annually to commemorate a victory by the Cambodian naval forces during the 12th century reign of King Jayavarman VII, according to the Tourism Cambodia website.

[Updated at 3:37┬Āp.m.] Steve Finch, a Phnom Penh Post reporter, told CNN there were reports from witnesses of people electrocuted as police fired water cannons at people on the bridge to hurry them along causing the stampede.

According to a Radio Australia report, a big crowd watching the annual water festival panicked when a number of people were apparently electrocuted on the bridge.

Cambodian authorities say hundreds of people were either crushed in the resulting stampede or drowned when they fell or jumped into the river.

Prime Minister Hun Sen has given several post-midnight live broadcasts to update the country. In one, according to the Associated Press, he called the stampede the "biggest tragedy" in Cambodia since the Khmer Rouge reign of terror in the 1970s.

He also ordered all government ministries to fly the flag at half-staff and said there would be a national day of morning.

[Updated at 3:05 p.m.] Cambodian Prime Minister Hun Sen said on state-run TV he was unsure yet as to what caused the stampede.

"This needs to be investigated more," Hun Sen said, according to an AFP report.

Hun Sen said a committee would be set up to examine the incident.

The Associated Press, Reuters and AFP reported that witnesses said 10 people had either collapsed or become unconscious during the festival, triggering the panic.

That led, they reported, to people rushing towards a bridge headed toward Diamond Island. That's when things got worse, a witness told AFP.

"We were crossing the bridge to Diamond Island when people started pushing from the other side. There was lots of screaming and panic," 23-year-old Kruon Hay told AFP. "People started running and were falling over each other. I fell too. I only survived because other people pulled me up. Many people jumped in the water."

Sok Sambath, governor of the capital's Daun Penh district, told AFP "this is the biggest tragedy we have ever seen."

iReport: Are you there? Send photos, videos, descriptions

[Updated at 2:41 p.m.] Khieu Kanharith, the Cambodian Minister of Information, has said the death toll from the stampede has now reached 339.

The three-day festival attracts people from all over Cambodia - and around the world - to the Royal palace. The festival is held annually to commemorate a victory by the Cambodian naval forces during the 12th century reign of King Jayvarman VII, according to the Tourism Cambodia website.

The festival is also used to pray for a good rice harvest, sufficient rain and to celebrate the full moon, the site says. The festival dates back to before the 7th century.

At night, the boats on the river are illuminated with neon lights and there is a fireworks display. 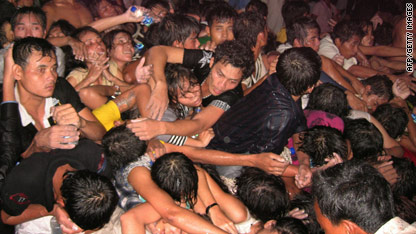 A stampede occurred during a water festival in Phnom Penh, Cambodia.

Officers with the Prime Ministers Bodyguard Unit stood outside a local hospital trying to help those who brought injured and control the scene of chaos outside.

Hundreds of shoes, clothing and personal items still littered the streets, the bridge and the underlying water near where the festival took place. The road on the bridge was so covered you could barely see the surface.

[Updated at 2:26 p.m.] Ambulances appeared to be making runs back and forth between the scene of the stampede and the hospital - dropping off the injured and then speeding away again, video on state-run Bayon Television showed.

Doctors stood outside a hospital, trying to direct traffic, between ambulances and vehicles of regular citizens bringing in the injured.

Friends and family clutched some the injured already in the hospital while others raced from the streets clutching the injured in the arms.

[Updated at 2:23 p.m.] Video from state-run Bayon Television in Cambodia showed panic in the streets and outside local hospitals.

Dozens of injured people appeared to be laying on what appeared to be the waiting room floor of a hospital with IV lines hooked up to them that were strung across benches.

"With this miserable event, I would like to share my condolences with my compatriots and the family members of the victims," he said, according to AFP.

More than 4 million people were attending the Water Festival when the stampede occurred, said Visalsok Nou, a Cambodian Embassy official in Washington.

[Posted at 1:55 p.m.] More than 100 people were killed Monday in a stampede that occurred during a festival near Cambodia's royal palace in Phnom Penh, a Cambodian Embassy official in Washington said.

RT @Acosta: What Tucker Carlson is doing by peddling ŌĆ£replacement theoryŌĆØ and other white nationalist talking points is dangerous and we caŌĆ”
susancandiotti

3:52 pm ET May 15, 2022 RETWEET
California's reservoirs are already at critically low levels, yet residents and businesses across the state are usiŌĆtwitter.com/i/web/status/1ŌĆ”qp
CNNweather

The faces of Australian election candidates are plastered on campaign posters across the country -- but there's oneŌĆtwitter.com/i/web/status/1ŌĆ”1a
cnni

3:30 am ET May 16, 2022 RETWEET
"Aquaman" star Jason Momoa took to Instagram to apologize for taking photos in the Sistine Chapel -- by posting a sŌĆtwitter.com/i/web/status/1ŌĆ”Ei
cnni

3:00 am ET May 16, 2022 RETWEET
The evacuees are trying to start over in areas beyond Russian control, but the war has followed them. cnn.it/3yB7LEr
cnni