The Biden administration is expected to announce that its top envoy for Afghanistan, Zalmay Khalilzad, will step doŌĆtwitter.com/i/web/status/1ŌĆ”5B 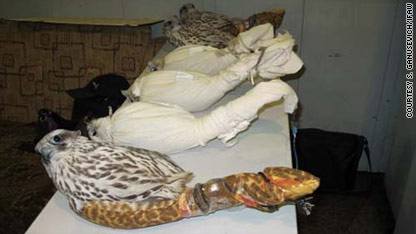 The eight gyrfalcons were swaddled in pillow cases and other cloth when customs officials discovered them at Moscow's Sheremetyevo International Airport.

Customs officials seized eight rare falcons at the Moscow airport after a woman tried to smuggle the wrapped, boxed birds out of the country, the International Fund for Animal Welfare reported.

The gyrfalcons were found in two cartons being loaded into the hold of a plane bound for Damascus, Syria, on Sunday, the group said. The woman who checked the cartons as her luggage was detained and released pending a court appearance.

ŌĆ£At least 100 wild gyrfalcons are smuggled out of Russia each year, primarily driven by demand from the growing popularity of falconry in the Middle East,ŌĆØ said IFAWŌĆÖs Russia director, Masha Vorontsova, in a statement.

The fast and powerful predator is the world's largest falcon. It breeds in arctic and subarctic regions and preys primarily on large birds, according to the Cornell University Lab of Ornithology.

They can command as much as $50,000 on the black market. Officials believe the birds seized at Sheremetyevo International Airport were captured in RussiaŌĆÖs Far East and transported through two security checkpoints and a customs inspection before being detected.

The birds are expected to survive and will reside at IFAWŌĆÖs raptor rehabilitation center until they are ready to be released into the wild, likely sometime next month.

The gyrfalcon is listed in the International Union for the Conservation of NatureŌĆÖs Red Book of endangered species and the Convention on International Trade in Endangered SpeciesŌĆÖ Appendix I. The latter designation, says IFAW, makes any commercial trade involving the birds illegal.

11:33 am ET October 18, 2021 RETWEET
Colin Powell, military leader and first Black US secretary of state, dies after complications from Covid-19. He hasŌĆtwitter.com/i/web/status/1ŌĆ”0r
susancandiotti

12:37 pm ET October 17, 2021 RETWEET
What happened to Christina? We must find out the truth. twitter.com/lmauricecpr/stŌĆ”
sarasidnerCNN