St. Louis most violent? It's not so simple, expert says 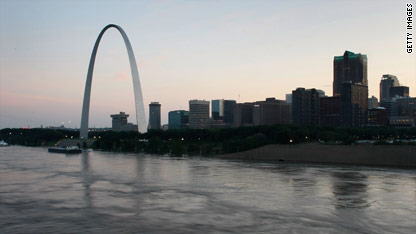 St. Louis, Missouri, was ranked as the most crime-ridden city in the U.S.

Camden, New Jersey, has reason to celebrate today. It is no longer ranked as the most dangerous city in America.

Camden is now the second most crime-ridden city, second to St. Louis, Missouri, according to CQ Press, which annually publishes reference books based on academic and government data. The most violent city list is based on the FBI's 2009 uniform crime statistics covering murder, rape, burglary, robbery, aggravated assault and vehicle theft.

According to CQ, St. Louis had over 2,000 crimes per 100,000 residents, compared to the national average of about 430 crimes per the same number of residents. For the second straight year, Colonie, a suburb of Albany, New York, had the least crime.

But such rankings tend to be oversimplifications, experts say. What's more, the FBI discourages using its stats to make sweeping generalizations about crime and whole cities, said John Jay College of Criminal Justice professor Andrew Karmen. He specializes in crime statistics and has written extensively about how they can be manipulated or presented in a biased way.

"When you look at these rankings and lists, the findings fall apart," he said. Crime reporting is nuanced and is affected by factors that can differ from one zip code to another, much less one city to another.

CQ, which sells its book on the findings for $70, acknowledges that, said spokesman Ben Krasney.

"The data is not flawless," he said. "We're a reference publisher, a starting point for other research. Crime rates within boundaries of a city - whether one neighborhood has more crime than another - we don't get into that."

Karmen said it's important to consider how, why and when crime is reported in different cities. If a police department is perceived as friendly, a welcoming place to file a report or come forward as a victim, crime stats are going to appear higher, for example.

Although "uniform" crime statistics are supposed to be just that, crime classification can vary. Vehicular manslaughter might not always be classified as murder, but rather a crime involving a vehicle, he said.

The faltering economy is also a huge factor in crime data.

CQ reports that the top five most violent cities in America, from first to fifth, are St. Louis; Camden; Detroit, Michigan; Flint, Michigan; and Oakland, California.

"Consider the industrial aspects of some of those cities and what has happened with jobs and those markets in the past few years," said Karmen. "The whole picture cannot be fairly reduced to a list."