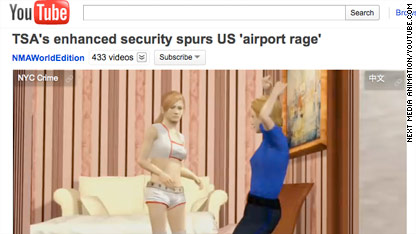 They say imitation is the sincerest form of flattery - but what about mockery?

It's something the TSA is battling as backlash grows regarding their pat down procedures - and they are getting the full treatment, a la Tiger Woods scandal.

No doubt there are very real concerns about the pat downs and full body scans: a flier had to show her prosthetic breast and just recently a video of a shirtless boy getting a pat down has gone viral. But that doesn't mean people are shying away from mocking the griping-about-groping issue.

From a "Saturday Night Live" skit, to a fake Twitter account and a Taiwanese animation mocking the outrage and procedure, the TSA is getting hit hard.

And if "SNL" isn't an indicator the story has hit big time - leave it to Twitter.

The TSA now has gotten the fake Twitter account treatment. The fake account @TSAgov, created by an unknown person, says in its profile "We pat your groin. We see you naked. We're the doormen to the sky. Why? Because everybody is a terrorist."

And their tweets mirror some of the very real complaints for flyers, but also mock the widespread coverage of the issue.

"Your freedom is in our hands. Literally. #tsa #tsaslogans #tsagov," one Tweet says.

"We opt-out of listening to you whine. #tsa #tsagov," says another.

And the video goes there - all the way there, if you know what we mean.

Similar to the "SNL" feature it shows a female passenger asking for a private pat down - which takes her to a private room where you'll find a king-size bed and TSAÂ  agent dancing in a fairly seductive fashion.

In the video, they call the screeners "RapeScan Systems," mock national opt-out day in what would be the worst-ever-possible scenario for TSA where those who choose to opt out of screening take a plane. Not to be outdone, they also have a cross-dressing male passenger who battles against flirtations from a TSA agent. That's when he reveals undergarments with explosives with a sign attached that says "Osama's Secret."

And it isn't just the big guns pulling out their parodies. Michael Adams, known as a social justice advocate called The Health Ranger gave his take with a new rap parody called "Don't Touch My Junk (The TSA Hustle). The video is inspired by the now infamous confrontation between John Tyner who told a TSA agent in San Diego "If you touch my junk I'll have you arrested."

But what about you, do you think the TSA practices are necessary or crossing the line. Share with us at iReport your thoughts about whether pat-downs make you feel safe or scared.

12:04 am ET January 21, 2022 RETWEET
Maybe there is something to visualizing success after all. Experts share how your expectations of yourself and yourâ€twitter.com/i/web/status/1â€¦1y
cnni