If not body scans, what other technology? 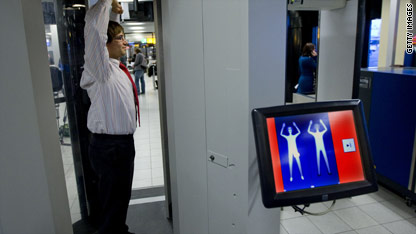 A passenger at Schiphol airport in December 2009 going through a full-body scanner.

At the heart of the uproar over full-body scans is that people are creeped out by the idea that a stranger would see a picture of them naked, much less that those images would be recorded and stored somewhere.

A noted nuclear scientist affiliated with the prestigious Lawrence Livermore National Laboratory in California says that a relatively inexpensive and simple tweak could be made to body scanners that would assuage passengers' anxiety.

The technology - a tool that could be added without much fuss to 385 body scanners in 68 U.S. airports - would automatically distort the body's image so that something almost cartoon-like would be produced, said Bill Wattenburg, a former member of the Air Force Scientific Advisory Board and a University of California Berkeley electrical engineering professor. He has designed anti-terror devices that the U.S. military uses - imaging that can see around walls, for example.

Wattenburg said he spoke with U.S. Department of Homeland Security officials in 2006 about the tool but the talks went nowhere. "We tried, we really did, anticipating that this kind of embarrassment people are feeling would eventually be heard. But no one listened," he said.

Wattenburg supports the use of scanners, calling them an "essential" tool to fight terrorism, even if only as a deterrent.

The Washington Post first reported on Wattenburg's claim in a recent story. TSA spokesman Nick Kimball told the newspaper that he could not immediately confirm Wattenburg's 2006 conversation with federal officials. "That was another administration," the Post quoted Kimball.

Reports across the country regarding scanners have discussed other body-analyzing technology. The Seattle Times reported that Amsterdam's Schiphol Airport uses scanners that can detect metallic and non-metallic materials such as explosives, gels, powders and liquids. Read more in here.

For example, current scanner technology cannot detect a body cavity bomb or objects hidden deeper one-tenth of an inch below skin level, according to CNN reporting. Watch a report by CNN's Dr. Sanjay Gupta about the scanners.