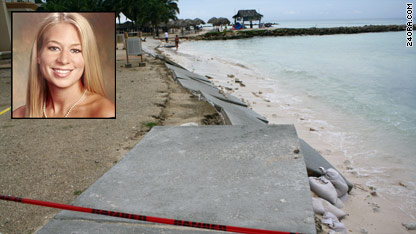 Tests were done to see a bone that was found was human -- and if it was a match to Natalee Holloway.

[Updated at 12:02 p.m.] A portion of a jawbone recently found on a beach in Aruba is human - but is not Natalee Holloway, the Alabama teenager who was last seen on the island in 2005, authorities said Tuesday.

Authorities said dental records used to compare the small amount of the DNA on the bone did not match. Solicitor General Taco Stein said there was a molar present in the jawbone and dental records determined Holloway had her molars taken out - ruling out the possibility that the bone was a part of her remains.

"Based on dental records, it can be ruled out that the bone fragment came from Natalee Holloway," the Aruban Prosecutor's Office said in a statement.

Stein also added that officials had "no new leads" in the Holloway case.

The tests, conducted at the Netherlands Forensic Institute in The Hague, Netherlands, were to first determine whether the jawbone found on an island beach is that of a human or that of an animal. If the bone is human, authorities said, they would attempt to determine through DNA testing if it belonged to Holloway. The Alabama 18-year-old was last seen on the island in 2005.

Holloway's dental records were sent to the forensic institute last week, according to the FBI.

Part of a jawbone with a tooth was found earlier this month by an American tourist near the Phoenix Hotel, a large resort on the western side of the island, Aruban prosecutor Peter Blanken said. Contacted by CNN, the hotel referred questions to local authorities.

The prosecutor said the bone was initially examined by a forensic expert in Aruba, who determined it was from a young woman. But Blanken cautioned the final determination would be made by the forensic institute.

Also on Monday, police collected a second bone that was found earlier this month on the beach by a New Jersey family, said Ana Angela, spokeswoman for Aruban prosecutors.

A man has been arrested and charged with a hate crime after an alleged attack on a taxi driver at New York City's Jâ€twitter.com/i/web/status/1â€¦3O
cnni

3:31 pm ET January 17, 2022 RETWEET
If you can believe it -- MORE winter weather could impact the same spots later this week, that got hit Monday and tâ€twitter.com/i/web/status/1â€¦0P
CNNweather

3:21 pm ET January 17, 2022 RETWEET
The colossal 180 million-year-old fossilized remains of an ichthyosaur have been found in the UK, in what researcheâ€twitter.com/i/web/status/1â€¦ru
cnni

2:31 pm ET January 17, 2022 RETWEET
RT @amanpour: On #MLKDay, we give the great civil rights leader the last word. "Somewhere I read of the freedom of assembly," King said oâ€¦
cnni