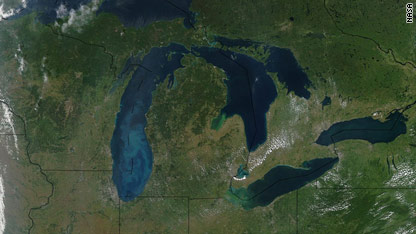 The temperatures of Earth's largest lakes have risen in the past 25 years as a result of climate change, according to a new NASA study.

The greatest increases were in the mid- to high- latitudes of the Northern Hemisphere, in a pattern consistent with changes associated with global warming, said Simon Hook, a scientist with NASA's Jet Propulsion Laboratory in California.

"The key thing is it’s an independent study that provides a new of piece evidence that warming's taking place; and it's made possible through a comprehensive view that the satellite data provides, by allowing us to look over the entire world, as opposed to a particular region," he said.

"From a scientific point of view, small differences in lake temperatures can have big change in a lake's ecosystem - a new fish species that people don't want, new plants; so from our point of view, what we want to do next is understand what the impact of these changes is going to be on the lake's ecosystem."

The study's results incorporated other techniques to verify the satellite data, such as direct measurements of water temperature, wherever possible, Hook said.

The lakes were chosen for inclusion in the study based on their size - typically at least 193 square miles or larger, so conditions on land would not influence the results. The study used nighttime data from summer months over the past 25 years to avoid interference from cloud cover or ice.

Of the 167 lakes surveyed, researchers were able to use data from 104, with 41 producing results that were "statistically significant," he said. Four lakes showed signs of cooling, but the differences were small enough to render them neutral, Hook said.

The satellite temperature trends largely agreed with trends measured by buoys in the Great Lakes, Earth's largest group of freshwater lakes in terms of total surface area and volume.

"There are ways to verify data independently of the satellite data, and we used those to confirm our findings," he said. "From this particular data set, we can say in the last 25 years, looking at these lakes, there seems to be a significant warming trend."