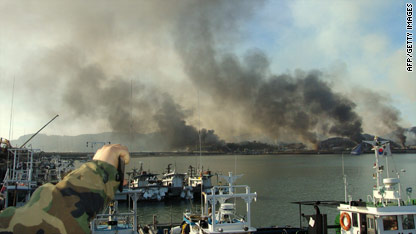 It didn't take long for commenters on a Chinese website to begin weighing in on North Korea's deadly artillery attacks on the South Korean island of Yeonpyeong.

In the hours since the incident, the popular China-based online forum, Tianya Club, has lit up with chatter on North (and South) Korean temperament, why it happened and fears over stock prices.

Below are some translated comments from the site, which claims to have more than 45 million unique visitors. All the comments are anonymous.

“It’s better for the North Koreans to fire their artillery shells before they expire, otherwise they may have to dump them.”

“(North Korean belligerence) is like a women’s menstrual cycle, you can count on it to occur regularly and you better get used to it.”

“It’s confusing (why the North Koreans would attack)  - I only hope this will not affect prices of any stocks I hold.”

“It seems like the more advanced a country becomes, the more they are in fear of war.”

“The real reason is to garner prestige for Kim Jong-un, apparent heir.”

“Good excuse for the US troops stay in South Korea for another couple of years.”

“China’s reaction may seem the mildest on its face, but I’ll guess China will do the most toward solving this problem.”

“I work with South Koreans. They are more mentally prepared for a big war than you may think.”