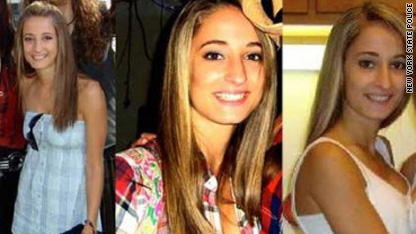 "Our indication is Ms. Watson desired this relationship to end in early October ... Apparently that message didn't get through to Mr. Pieper," Fitzpatrick said.

Authorities believe Watson was killed in her residence in Liverpool, New York on the morning of November 19 and that her body was taken to a heavily wooded area a couple miles away.

[Original post - 4 p.m.] A body discovered in a heavily wooded area near Syracuse, New York, is believed to be that of missing college student and ballerina Jenni-Lyn Watson, authorities said Saturday.

The remains were found by searchers at 10:30 a.m. near Clay Central Park in North Syracuse, the Onondaga County Sheriff's Office said in a statement.

More details were to be given at a press conference scheduled for 5 p.m. Saturday.

Watson, 20, of Liverpool, New York, was last seen November 19 at her family's home, said Sgt. Robert Marshall of the Onondaga County Sheriff's Office. Watson was home on a Thanksgiving break from Mercyhurst College in Erie, Pennsylvania.

Liverpool is a suburb of Syracuse.