Stranger saves Christmas for woman whose gifts were stolen

A Black Friday theft has led to an act of kindness from a stranger, giving true┬Āmeaning to the phrase "holiday spirit."

Kerry Ann Brown and her friends were the first people to enter┬Āa West Palm Beach, Florida, Best Buy electronics store on Black Friday, after camping out since Wednesday, CNN affiliate WPBF reported. She put her merchandise in her car, went to a nearby JC Penney, and┬Āwhen she returned, her car had been broken into and $1,000 worth of merchandise was gone.

Brown told WPBF that among the stolen goods were three computers that she was going to send to relatives in Jamaica.

A small business owner man in New York saw the story on CNN.com and decided to step up.

Alan Howard, who owns Plesser's Appliances in Babylon, New York, said he would replace $1,000 worth of merchanside.

Through WPBF, Howard contacted Brown and told her he wanted to give her a gift certificate.

"I don't have words to comprehend how I'm feeling right now," Brown told Howard in a telephone call Saturday. "I'm awestruck, thank you.┬ĀI didn't know people were like that in the world."

"There's still some good in the world," Howard said. 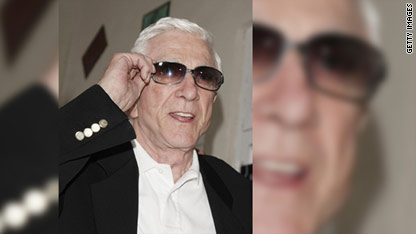 Actor Leslie Nielsen, best known for his film roles in "Airplane!" and "The Naked Gun" series, died Sunday of complications from pneumonia, his family said.

Nielsen died in a hospital near his home in Fort Lauderdale, Florida, surrounded by his wife and friends. He was 84.

"In lieu of flowers, the family requests donations in his name to the charity of your choice," the family said in a statement.

Police in Chicago, Illinois, are investigating the death of a man who fell from the upper level of Soldier Field, home of the Chicago Bears, to the ground outside the stadium, police said.

The incident happened around 5 p.m. Sunday while the Bears were playing the Philadelphia Eagles, said Veejay Zala of the Chicago Police Department. The 27-year-old man was pronounced dead at Northwestern Memorial Hospital at 5:27 p.m.

The man's name was not immediately released.

In July, a fan trying to catch a foul ball at a Texas Rangers game in Arlington, Texas, fell 30 feet, injuring himself and four others. Tyler Morris tumbled over the railing on the club level of the stadium, hit the railing on the suite level and then landed on the lower deck. His injuries were not life-threatening. 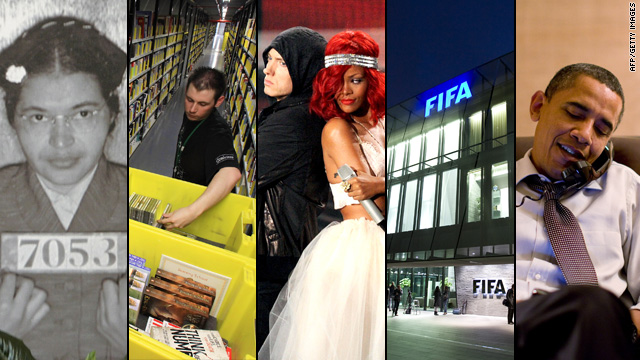 Thanksgiving is┬Ābehind us, but all the shopping and preparation┬Āwas just the warm-up for December, the most wonderful time of the year to some, and for many, the busiest.

The cycle of consumerism that began on Black Friday continues with Cyber Monday, when online merchants target bargain hunters. Check in with CNN.com for updates on "e-tail" traffic, the hottest items, tips for shopping safely online and unexpected Cyber Monday madness.

The holiday season begins in earnest this week with Christmas tree lightings┬Āacross the country, including at New York's Rockefeller Center on Tuesday. Hanukkah, the eight-day Jewish festival of lights,┬Ākicks off Wednesday afternoon with latkes and dreidels for all at the lighting of the National Menorah in Washington, D.C.

December may not be the ideal time for donning Speedos and running through the streets of Chicago, but that's not going to stop participants in Saturday's Santa Speedo Run. Normal clothes are acceptable, the event's website says, but probably not preferred.

END_OF_DOCUMENT_TOKEN_TO_BE_REPLACED

The FBI announced a $10,000 reward Sunday for information leading to the arrest of┬Ā the person or people responsible for an apparent attack on an Oregon Islamic center.

The┬Ācenter was┬Āwas attended by the man authorities say was behind a foiled bomb plot at a recent Portland Christmas tree lighting.

A fire appears to have started sometime early Sunday morning at the Salman AlFarisi Islamic Center in Corvallis, Oregon, authorities said. The building suffered some fire and smoke damage.

Mohamed Osman Mohamud, who was arrested in connection with the plan to detonate what he thought was an explosives-laden van at a Portland tree-lighting ceremony Friday night, occasionally attended the center, the mosque's imam told CNN.

The naval operations are "no more than an attempt to find a pretext for aggression and ignite a war at any cost," North Korea's official Korean Central News Agency said, warning that the drills "are putting the Korean Peninsula at a state of ultra-emergency."

North Korea warned of unpredictable "consequences" if the United States sends an aircraft carrier to the Yellow Sea for the military maneuvers.

END_OF_DOCUMENT_TOKEN_TO_BE_REPLACED

The front-runner in Haiti's presidential race denounced Sunday's national elections, calling for a complete annulment of the vote due to irregularities and ballot-box stuffing.

"I am asking my country's citizens, I am asking the Conseil Electoral Provisor, the government, and I'm telling the international community that as the leading candidate I'm asking for the formal cancellation of the elections," Mirlande Manigat told CNN.

At the same time, at least five other presidential candidates were gathering at a hotel in Port-au-Prince for what the campaign of contender Michel Martally billed as a press conference "to denounce today's massive fraud all over the country."

END_OF_DOCUMENT_TOKEN_TO_BE_REPLACED

Dramatic surveillance video shows why one couple have a lot to be thankful for this Thanksgiving holiday.

Aaron and Melanie Richman, both 22, stopped at a Kansas City, Missouri, gas station early Wednesday after driving from Colorado en route to Eldon, Missouri, according to CNN affiliate KCTV.

After gassing up, the couple parked their vehicle away from the pumps and walked over to talk to the drivers of their moving van.

In a matter of seconds, a man noticing the unattended vehicle made a beeline for the RichmansŌĆÖ car.

The man jumped inside and began to drive off - with the RichmansŌĆÖ 6-month-old inside.

END_OF_DOCUMENT_TOKEN_TO_BE_REPLACED

No documents had been posted on WikiLeaks, which said via Twitter earlier┬ĀSunday that it was under cyber attack, when five newspapers - the New York┬ĀTimes, the Guardian in England, Le Monde in France, Der Spiegel in Germany and┬ĀEl Pais in Spain - put details from the leaked documents on their websites.

The United States had warned WikiLeaks editor-in-chief Julian Assange┬Āthat publishing the papers would be illegal and endanger peoples' lives.

Earlier Sunday, Wikileaks tweeted that it was experiencing a distributed denial of service (DDOS) attack. That's an effort to make a website unavailable to users, normally by┬Āflooding it with requests for data.

6:54 am ET February 1, 2023 RETWEET
The lingering effects of ice storms in the western and southern parts of the country have caused thousands of delayŌĆtwitter.com/i/web/status/1ŌĆ”E0
cnni

6:54 am ET February 1, 2023 RETWEET
The lingering effects of ice storms in the western and southern parts of the country have caused thousands of delayŌĆtwitter.com/i/web/status/1ŌĆ”E0
cnni