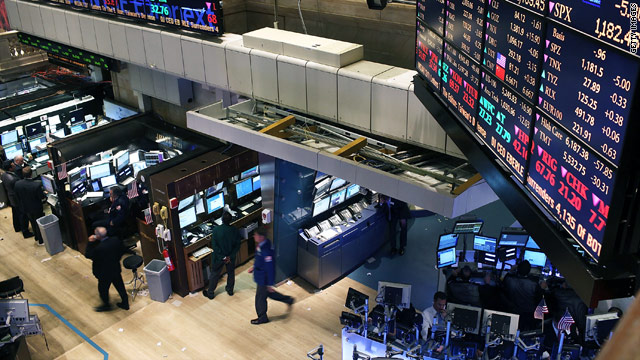 Stocks end November with a whimper

Stocks started November with a bang but ended it with a whimper, as all three major indexes closed the day and month lower on Tuesday.

A stronger-than-expected report on consumer confidence muffled some losses, but the market couldn't fully recover from a weak housing report and concerns about Europe's economy.

It was a downbeat end to a month that started out strong. The Dow and Nasdaq shot to two-year highs in early November after the Republican success in the Congressional election and the Federal Reserve's announcement of a second round of economy-boosting asset purchases.

Amid the latest signs of strife in the eurozone, European bond markets are in some tumultuous times.

Government bonds are usually thought of as one of the safest investments, because the risk of a country defaulting on its debt is considered slim. But lately, signs of instability in Europe have rattled global markets, and turned the safe-haven bid on its head - at least on that side of the Atlantic.

Investors are more reluctant to hold on to European government bonds and are demanding higher yields. At the same time, they're scooping up more insurance against defaults on those bonds, in the form of so called credit default swaps.

China has successfully landed its rover on Mars, according to state media, becoming the second country in history tâ€twitter.com/i/web/status/1â€¦LP
cnni

10:01 pm ET May 14, 2021 RETWEET
Travel is a big exception for new mask guidance in the United States, and the transportation industry says it willâ€twitter.com/i/web/status/1â€¦Q1
cnni

7:42 pm ET May 14, 2021 RETWEET
On the morning of April 17, two brothers in Westchester, New York, woke up to learn that they had become millionairâ€twitter.com/i/web/status/1â€¦es
cnni

7:20 pm ET May 14, 2021 RETWEET
The US CDC has said that people fully vaccinated against Covid-19 do not need to wear masks or practice physical diâ€twitter.com/i/web/status/1â€¦Ew
cnni