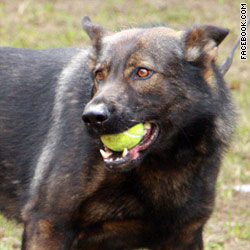 Bane is a 4-year-old German shepherd.

A Michigan State Police dog searching for a missing dementia patient has become the subject of a search himself.

Bane, a 4-year-old German shepherd, disappeared November 13, according to a website set up by his handler, Michigan State Trooper Jamie Bullis.

The two were part of a group looking for the missing man in a swamp near Alpena in northern lower Michigan when the dog's lead got tangled in brush, Bullis wrote.

"I dropped the lead to untangle him. About the time I got him free, a deer that had been bedded and was less than five yards from me jumped up and ran directly in front of Bane. Bane gave chase," Bullis wrote. "He was out of sight in about a second and I have not seen him since."

A "Find Bane" Facebook page set up by Bullis has garnered the maximum 5,000 friends, and a video on YouTube chronicles Bane's training.

Volunteers continue to look for Bane, but Bullis is not encouraging them to venture into the woods, because Michigan's firearm deer season continues until 30 minutes after sunset Tuesday.