U.S. general: No threat to troops, civilians in tense Korea 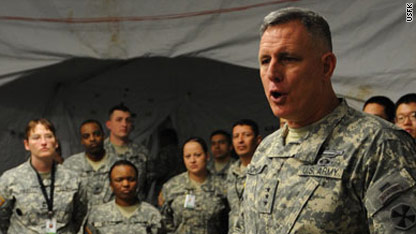 North Korea said Tuesday that U.S. military exercises with South Korea could lead to "all-out war any time." But for the thousands of U.S. military dependents on the Korean Peninsula, it’s largely business as usual, the newspaper Stars & Stripes reports.

Any move to evacuate the U.S. citizens is “not even close,” Stripes quotes a U.S. Forces Korea spokesman as saying.

“As of now, we don’t see any threat to 8th Army soldiers or families on mainland Korea. I encourage you to continue your normal, daily activities,” Lt. Gen. John D. Johnson, commander of the Seoul-based 8th Army, wrote on the unit’s website.

“We listen to the news, but we don’t let it affect our lives,” Orlando Lopez, an Army captain with a wife and two children in Seoul, told Stripes. “Right now, we think it’s calmed down.”

The U.S. military maintains a force of 28,500 in South Korea, the U.S. State Department says. About half of those troops are allowed to bring family members, according to USFK.

Tensions have been high on the Korean Peninsula for the past week after a North Korean artillery attack on Yeonpyeong Island killed four people and wounded 18 others. South Korea responded with shelling of its own.

“The U.S. and the South Korean warmongers are escalating confrontation and tension through ceaseless moves to ignite a war, seriously disturbing peace and security on the Korean Peninsula,” a report from the North’s Korea Central News Agency said.

But Gen. Walter Sharp, commander of U.S. Forces Korea, says in a statement on the command website that “the situation is calmer now” and only advises families to be sure contact information is updated in the event of an emergency.

And Stripes points out, the U.S. State Department has not issued a travel alert for South Korea.