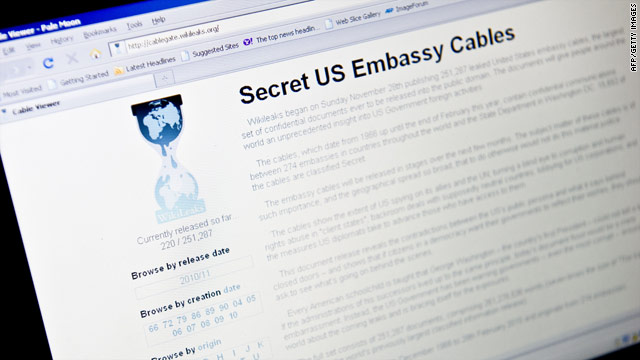 WikiLeaks: What we've learned so far

[Updated at 9:12 p.m.] After posting thousands of secret government documents, WikiLeaks came under an electronic attack designed to make it unavailable to users, the website said Tuesday.

It was the second attack since the site began publishing the first of what it says are 250,000 secret U.S. diplomatic cables from U.S. embassies around the world, documents that the website said represented the largest-ever disclosure of confidential information. Those documents give the world "an unprecedented insight into the U.S. government's foreign activities," the site said.

WikiLeaks drew widespread condemnation for publishing the confidential cables that, in some instances, detailed with unusual frankness Washington's diplomatic interactions with other countries. Former President George Bush called the leaks "damaging," saying WikiLeaks will hurt U.S. relations with the rest of the world.

So far, the leaks have provided us with a look at tensions between China and North Korea - a topic of discussion these days given concern over clashes between North and South Korea. Apparently, cables reveal China was weary of North Korea behaving like a "spoiled child."

We've also learned a little bit more about China's role in other global affairs - including Iran - and how China has been talking to the United States about containing Iran's nuclear program. But the cables also reveal the role of Chinese enterprises in Iran's strategy to obtain materials for its missile programs and the U.S. State Department's efforts to counter that strategy.

And with widespread concern about nuclear capabilities of Iran and North Korea, it makes sense that WikiLeaks documents show there was a focus on the health of leaders in both countries.

Speaking of North Korea's weaponry, the country apparently had Mongolia pass a message to the United States in 2009 about possible disarmament talks, which North Korea suggested that Mongolia could host.

Weaponry - and nuclear capabilities - naturally are of concern to countries around the world. Which may be why there are stacks of documents discussing the must-have weapons and the countries that want them.

Regarding Iran, one 2009 cable said that the predominantly Shiite Islamic nation was facing increased unrest in a largely Sunni province, Sistan-Balochistan, and that Iranian security forces were losing effective control over parts of the province, citing Iranian contacts.

We've also learned other tidbits from the documents, including that Brazil tried to distance itself from U.S. war on terror. Elsewhere in Latin America, the U.S. Embassy in Honduras unequivocally found that the forced removal of that nation's president last year was a coup that ushered in an illegitimate government, despite Washington's more measured tone in public. And U.S. State Department analysts asked the U.S. Embassy in Argentina for information on the mental state and health of Argentine President Cristina Fernandez de Kirchner, according to a December 2009 cable.

Diplomatic cables about Pakistan reveal U.S. anxiety about Pakistan's ﻿﻿uranium stockpile, its role in the stuggle against Islamic militants and its economic crisis, according to a New York Times review of the documents.

Some of the cables address how certain countries felt about taking in Guantanamo Bay prisoners that the United States wanted to move. When the United States wanted Kuwait to accept four Kuwaiti prisoners, Kuwait's minister of the interior responded that the country couldn't successfully hold them, and suggested instead that America drop them off in the middle of a battlefield in Afghanistan - where they were picked up - so they would die there, according to one released cable. Another document praised a former Guantanamo detainee, Moazzam Begg of Britain, for  "barnstorming throughout Europe pushing governments to accept" Guantanamo detainees for resettlement."

One of the documents says Saudi Arabia expressed concern over the fact that Saudis were temporarily on a U.S. list of nationalities ﻿that warranted additional screening at airports after ﻿a failed December 25 airplane bombing attempt.

Several cables paint an unflattering and somewhat unexpected portrait of Ahmed Wali Karzai, the half-brother of Afghan President Hamid Karzai. British Prince Andrew was called rude following some blunt words with U.S. officials,  and there's also some intel on how some world leaders and other operatives view other royals.