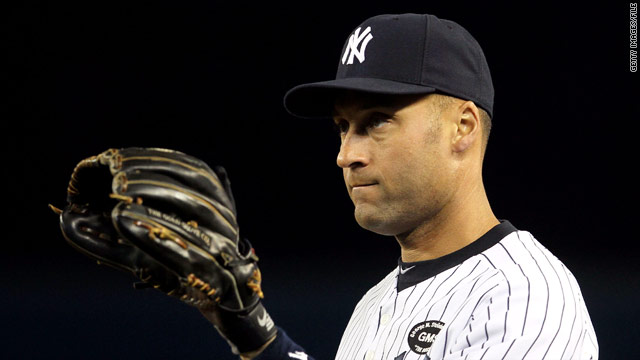 It's plenty cold outside, but baseball's hot stove is beginning to heat up this winter.

And so are talks between the New York Yankees and shortstop Derek Jeter, which earlier this offseason were as cold and distant as a spring training game in Greenland.

SI.com's Jon Heyman reports that there is new optimism between the parties after conversations and meetings held over the past few days. The negotiations have made such an about-face, Heyman writes, that the two sides could even strike a deal in the coming days.

That's a far cry from where Jeter, 37, and his lifelong team were earlier this week. The two parties have been at loggerheads of late, taking their contract disputes public and exchanging verbal jabs through the media over the past few weeks.

But the two parties now appear more ready to settle than before. As alarming (and entertaining) as it would be to see Jeter wear a different uniform in 2011, Heyman reports there is now a strong likelihood that the pinstriped icon will end up staying in the Bronx.

New York had previously not been willing to budge from its three-year, $45 million offer for the aging shortstop, while Jeter's camp was believed to be seeking a five-year deal worth around $23 million annually for quite some time.

But cooler heads now seem to be prevailing. Heyman writes that one source says the Yankees are willing to enhance their offer and up the deal to around $51 million or perhaps even more. An option for a fourth year is even being considered.

Jeter is coming off a 10-year, $189 million contract and a disappointing 2010 campaign, in which he hit .270 but still made the All-Star team and won a Gold Glove.

But the future Hall of Fame member's value to the organization goes far beyond the diamond, which the Yankees are likely now realizing after media boredom imagined the scenario of Jeter in a Red Sox uniform this week, an apocalyptic premise to Yankee Nation.

As one competing GM says in Heyman's story, "That would be one of the biggest shocks I've ever seen in sports."

Here is the action to catch tonight, with hardwood battles dominating this evening (all times Eastern):

The Celtics (13-4) go for their fifth straight win and look to stay undefeated at home when they host the Blazers (8-9), who are on a four-game tilt.

After losing 65-64 to Richmond last week, the Boilermakers (5-1) look to get back on board against the Hokies (4-2), who lost to UNLV in the 76 Classic championship game on Saturday.

Two Final Four favorites meet in the feature game of the ACC/Big Ten Challenge when the Spartans (5-1) travel to Krzyzewskiville to take on the Blue Devils (6-0). Duke won the national title last season and owns an 80-game non-conference home winning streak.

61 - Age of legendary sportswriter and Sports Illustrated contributor Jim Kelley, who died Tuesday after a long battle with cancer. Kelley was inducted into the Hockey Hall of Fame in 2004.

14 - Years it has been since Army played in a bowl game. The 6-5 Black Knights accepted a bid Tuesday to play in the Armed Forces Bowl on December 30 versus a to-be-determined Conference USA opponent.

15-2 - Record for the San Antonio Spurs, the NBA's best, after registering a 118-98 victory over the Golden State Warriors on Tuesday.