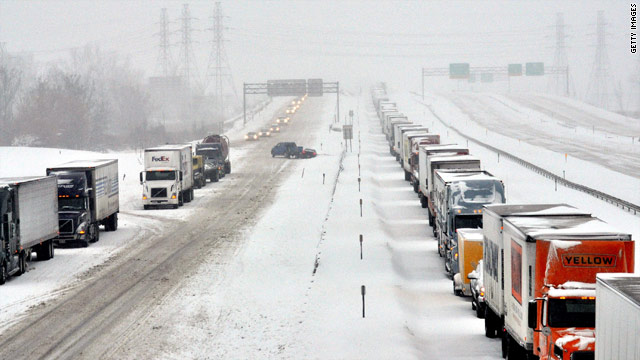 Heavy snow has shut down Interstate 90 near Buffalo, New York, leaving motorists stranded for more than 12 hours as of Thursday morning, with more snow on the way.

Shifting winds from the storm front that is moving through the eastern United States this week have put the city of Buffalo in the path of a lake effect snow band that forecasters said covered some areas with as much as 24 inches of snow in 24 hours.

Sam McMahon, who has been trapped on the interstate since 8:30 p.m. Wednesday, told CNN meteorologist Reynolds Wolf that while he has seen snow like this before, there is something unique about this storm.

"In terms of snowfall, I have seen snowfall like this before but I have never been stuck in a situation like this on the thruway this extreme," he said. The University of Buffalo student was heading home Wednesday evening and when he hit slow traffic. "By 9 o'clock we were stopped," he said. "Since 9:30 last night I haven't moved an inch."

Authorities are trying to keep the stranded motorists warm and hydrated. Officers and firefighters have been delivering water and gasoline to vehicles in need throughout the morning hours.

An Italian prosecutor on Saturday asked for life sentences for two American students charged with murdering a policâ€twitter.com/i/web/status/1â€¦sS
cnni