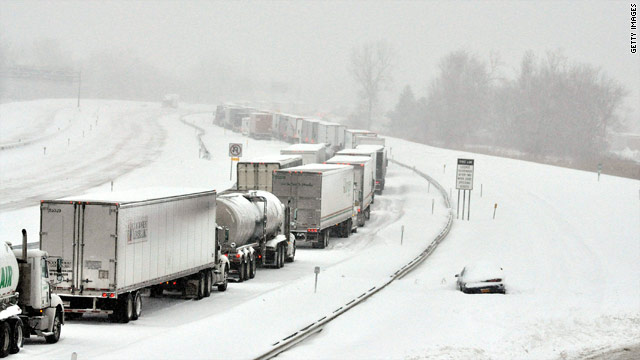 The motorists stranded on Interstate 90 in upstate New York on Wednesday and Thursday have a Great Lake to thank for much of the mess.

A lake effect snow band has covered parts of the Buffalo area with as many as 24 inches of snow in 24 hours, and more snow is expected through Friday morning.

For those not familiar with lake effect snow, it can form when cold air passes over a relatively warm body of water, such as Lake Erie. The air picks up moisture, which freezes and drops as snow over land.

"Long after the passage of cold fronts across the region, the relatively warm waters of the Great Lakes often create convective instability in an otherwise stable, arctic or polar continental air mass. â€¦ Heat and moisture from the warm lakes [rise] into the "modified" arctic air where it then cools and condenses into snow clouds."

If the winds are right, Buffalo can pick up lake effect snow from Lake Erie, which it is doing now.