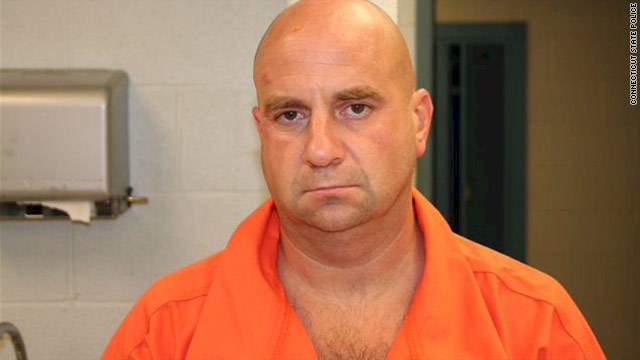 Steven Hayes, convicted of a brutal 2007 home invasion in which a Connecticut mother and her two daughters were killed, was sentenced Thursday to die for the crime.

In a strong and clear voice, the judge sentences Hayes to death on each of the six capital felonies.

"This is a terrible sentence. But in truth it is a sentence you wrote for yourself in flames on July 23, 2007 . . . your fate is now in the hands of others. May God have mercy on your soul."

A jury found Hayes guilty of killing Jennifer Hawke-Petit, 48, and her daughters - 7-year-old Hayley Petit and 11-year-old Michaela Petit - in their Cheshire, Connecticut, home in 2007.

It recommended that Hayes, 47, should die for his role in the deaths.

"The impact of these crimes against our family is like the impact of a bomb going off in your house . . ." William Petit, who survived the crime said. "I awoke to a confused terror . . . I'll always remember my father's face when I asked about the girls, and he just shook his head fro side to side and sobbed . . . Our home was no more . . ."

Hayes' lawyer, Thomas Ullman, said he was not surprised by the jury's decision - and that Hayes was actually pleased with the outcome.

"He wants to die," said Ullman last month. "He has categorized this process as suicide by state. He was unable to kill himself in prison and saw this as a way for the state to kill him."

Prosecutors alleged Hayes and co-defendant Joshua Komisarjevsky invaded the home of Dr. William Petit on July 23, 2007, beat and tied up Petit, raped and strangled Hawke-Petit, molested one of their daughters and set the house on fire before attempting to flee.

Komisarjevsky will be tried separately later.

CDC vaccine advisers voted Sunday to recommend the Johnson & Johnson Covid-19 vaccine. It is the first of the three‚Ätwitter.com/i/web/status/1‚Ä¶0f
cnni

5:31 am ET March 1, 2021 RETWEET
At the heart of this war of words lies the complex question of who can legitimately claim to be Indian and who has‚Ätwitter.com/i/web/status/1‚Ä¶hY
cnni

4:15 am ET March 1, 2021 RETWEET
A new study found that doctors gave the wrong antibiotics to nearly half of 670,400 people diagnosed with a UTI. In‚Ätwitter.com/i/web/status/1‚Ä¶Bo
cnni