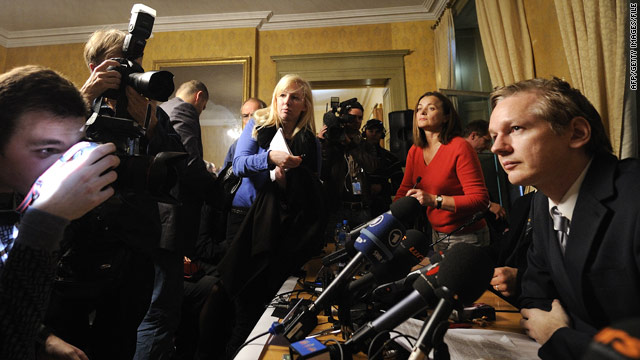 WikiLeaks cables -The United States scrambled to contain the fallout from the slow-motion leak of cables from its embassies worldwide Wednesday as new documents showed American diplomats casting a jaundiced eye toward corruption's grip on Russia. Secretary of State Hillary Clinton personally made "several dozen" calls to counterparts in other countries in an effort to mitigate the damage from WikiLeaks, a website that facilitates the anonymous leaking of secret information, a senior State Department official said.

As we continue to dig into the story we take a look at the secret life of WikiLeaks founder Julian Assange, whether leaks threaten to wreck banks, who's who in the cables, and a court's decision to refuse to hear Assange's appeal on an arrest warrant for suspicion of rape and sexual molestation.

When WikiLeaks first caused an international uproar this summer by publishing reams of classified U.S. intelligence, possibly stolen by a 23-year-old soldier using a CD and a memory stick, the Pentagon pledged to fix loopholes in its computer systems. CNN's Ashley Fantz will be taking a look at where we are in that process.

'Don't Ask, Don't Tell' - It's not if, but when, the law banning openly gay men and lesbians from serving in the military will be repealed, say advocates and top administration officials. Then it will be┬Āa question of how.

Will domestic partners receive benefits? Will gays and lesbians get their own military status? What will happen to housing? Will there be separate barracks and facilities? Will the change affect unit cohesion, especially on the battlefield? Will troops opposed to the repeal leave the military in droves? The Senate Armed Services Committee is hearing from the top military brass today.

World Cup announcement - The hour is almost upon us: FIFA will shortly vote on who will host the 2018 and 2022 World Cup finals. It sounds like a fairly simple, understated task to complete, but the honor of hosting the tournament has far-reaching ramifications.

The World Cup is challenged only┬Āby the Olympics as the biggest events in global sport; it generates billions of dollars┬Āfor the economy of the host, and creates a "feel-good factor" that is precious in the current era of austerity. Take a look at who the favorites are to host the next two tournaments. We'll be streaming the announcement live on CNN.com when it happens.

Human trafficking –– They were promised a better education; instead a group of girls from West Africa were enslaved, forced to work in hair braiding salons in New Jersey.┬Ā It was years before authorities busted the trafficking ring. Today, the girls are free and their traffickers are in prison.┬Ā They spoke out about their experience for the first time to CNN. Their story will be featured later today on CNN.com, and tonight on a special AC360┬░ series, "American Slaves: Hiding in Plain Sight," at 10 ET on CNN.