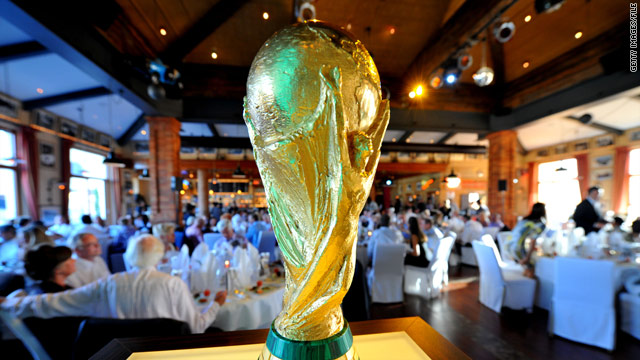 [Updated at 10:42 a.m.] FIFA's World Cup will be held in Qatar in 2022, the governing body said in a press conference Thursday.

The tiny, wealthy Middle Eastern nation beat out the United States, Japan, South Korea and Australia to host what will be the largest sporting
event in the world in 2022.  Sheikh Mohammed bin Hamad Al-Thani, the son of Qatar's emir and head of the emirate's bid team, said he was looking forward to the first time a Middle Eastern nation hosts the event.

FIFA president Sepp Blatter confirmed that the ruling body's desire to grow the sport around the world played a big part in the committee's thinking.

"I have to say thanks to to the executive committee because for 2018 and 2022 we go to new lands, because the FIFA World Cup has never been in eastern Europe or the Middle East. So, I'm a happy president when we speak of the development of football," he said.

[Posted at 10:37 a.m.] The 2018 FIFA World Cup will be held in Russia, the sport's governing body announced Thursday.

The Russian government has pledged billions of dollars to build new stadiums and infrastructure. A tournament in Russia would also open a huge, relatively untapped market for FIFA, which has awarded World Cups to South Africa in 2010 and Japan and South Korea in 2002 for similar reasons.

Russia beat out England and joint bids from Spain/Portugal and Belgium/Netherlands to host what will be the largest sporting event in the
world in 2018. It will be the first time the contest has been held in eastern Europe.

Russian prime minister Vladimir Putin decided against attending the ceremony in Zurich, but his deputy Igor Shuvalov was present to accept the
first successful bid from Eastern Europe.

"You have entrusted us with the FIFA World Cup for 2018 and I can promise that you will never regret it. Let us make history together," he told the
assembled delegates.