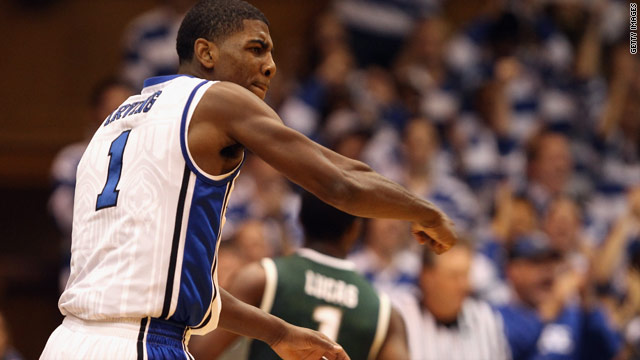 Could Kyrie Irving be the best freshman player Duke has ever seen and 2011’s No. 1 NBA draft pick? It’s very much possible according to SI.com’s Seth Davis. If the talents of the first-year point guard from New Jersey weren’t evident before the Blue Devils’ comfortable 84-79 victory over Michigan State University Wednesday night, they certainly are now. "He'll be like, 'Get out of the way, I've got it,"' Nolan Smith said after the game. "You don't really hear that too often, when a freshman will tell two seniors on the wings to get out of the way. We have no problem letting him do it."

Sinking a career-high 31 points, notching six rebounds and going 13-in-16 from the foul line is an impressive feat for Irving, though his successes also cast more of a spotlight on standout senior Kyle Singler’s shooting slump.

But combining Irving’s impeccable performance, with MSU’s penchant for throwing the ball Duke’s way, victory came relatively smoothly for the No. 1 ranked Blue Devils who shot 47 percent and capitalized on the Spartans’ 20 turnovers.

Despite Singler’s shooting woes, Duke is without question one of the NCAA’s most dominant teams, though they, along with MSU, definitely have room to improve. Look for both of these teams to strengthen as the season chugs along and, maybe, meet up again in April.

All eyes are on LeBron James tonight as he makes his return to the city he spurned:

Cleveland Cavaliers vs. Miami Heat (8:00 p.m., ET) – The game everyone has been waiting for is upon us. LeBron James will take the court in Cleveland for the first time since announcing his decision to leave his hometown team to head to Miami. Look for emotions to run high and tempers to flare as this contest carries with it more than just bragging rights.

2022 – Year that the United States is hoping to bring the World Cup to America. Bill Clinton, Morgan Freeman and others spoke during a 30-minute presentation making the country’s pitch to host the competition. Read what SI.com’s Grant Wahl has to say about the United States’ bid before today’s decision.

$40,000 – Fine Panthers safety Sherrod Martin was given after a helmet-to-helmet hit on Cleveland tight end Evan Moore in Sunday's game. The penalty equals to losing pay for about two games for Martin.

41 – Number of saves Tim Thomas had in the Bruins’ 3-0 win against the Flyers. The rout marked Boston’s fifth shutout of the season.