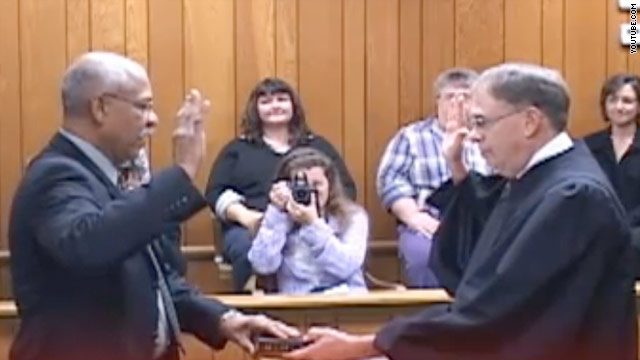 The retired Federal Bureau of Prisons Warden and former deputy commissioner for the Indiana Department of Corrections is the first African-American Republican to be elected a county sheriff in Illinois, the land of Lincoln.

"Someone, I think probably a week before the election said, 'You know you're going to be the first African-American Sheriff in Illinois,'" Ed Motley told local media.

"After five years of living here, this is something I want to do.Â  Give back all my experience, all my training to the people of Edgar County,"

Mays created this digital love letter in the form of a YouTube video called "I Hope This Gets To You" for his girlfriend, who moved across the country for grad school, in the hopes that it would find its way to her through tweets and viral sharing.

It seems to be working: The Village Voice picked up the story, followed by major media outlets. Singer Katy Perry even got in on it trying to pass along the tweet.

"My girlfriend got into an MBA program at Duke - she grew up in L.A., and I work in L.A. - so she's away for two years. It got me to thinking about how long distance isn't really long distance anymore," Mays told The Village Voice. "It seems like we're far apart, but we're living in a very different world these days, and we can feel close without having to be close every day. I wanted to show how we try to make the world a little smaller."

President Obama has nominated Donald as a judge for the United States Court of Appeals for the Sixth Circuit.

â€śJudge Donald has shown an outstanding commitment to public service throughout her career and as a District Judge in Tennessee,â€ť President Obama said in a White House statement. â€śI am proud to nominate her today for a seat on the United States Court of Appeals and I am confident she will serve the American people with distinction.â€ť

@Dnewkidd1 Wait till you see what the statistics say
sarasidnerCNN

4:34 pm ET January 28, 2022 RETWEET
@wndrland1776 @smthchlt29936 @CNN We are talking about some of the Common ground. And the persistent bias that keepâ€twitter.com/i/web/status/1â€¦Ea
sarasidnerCNN