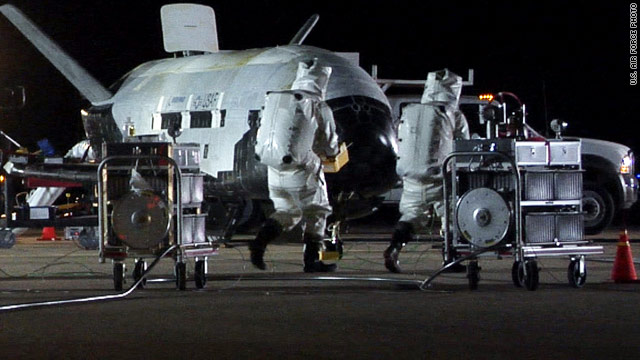 The X-37B, known as Orbital Test Vehicle 1, landed at 1:15 a.m. at California's Vandenberg Air Force Base after spending more than seven months in space on its maiden voyage.

"Today's landing culminates a successful mission based on close teamwork between the 30th Space Wing, Boeing and the Air Force Rapid Capabilities Office," said Lt. Col. Troy Giese, the X-37B program manager from the AFRCO. "We are very pleased that the program completed all the on-orbit objectives for the first mission."

During its 220 days in orbit, the unmanned space plane conducted "on-orbit experiments" and "fired its orbital maneuver engine in low-earth orbit to perform an autonomous re-entry before landing," the Air Force said in a press release.

Otherwise, the exact nature of X-37B's mission is unclear because it remains classified.

Some analysts have speculated that the spacecraft is an unmanned orbital spy platform and not a weapon, according to Space.com.

The program's test objectives include risk reduction, experimentation and concept of operations development for reusable space vehicle technologies, according to the Air Force.

We also know a bit about its features from the Air Force: The unmanned spacecraft is designed for vertical launch to low Earth orbit altitudes where it can perform long-term testing and experimentation. Upon command from the ground, the OTV autonomously re-enters the atmosphere, descends and lands horizontally on a runway. Its height is 9 feet 6 inches and its wingspan is 14 feet 11 inches.

The Air Force is preparing to launch the next X-37B in spring 2011.