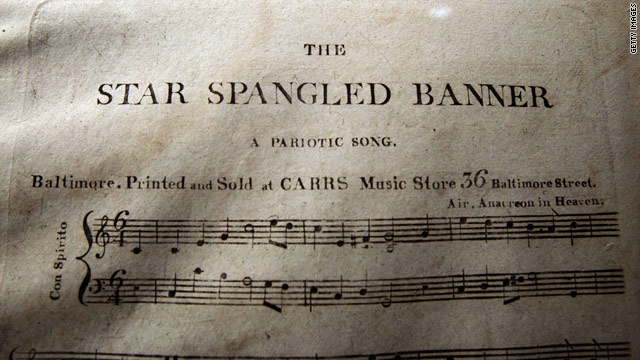 A near two-century-old copy of "The Star Spangled Banner" sold for $506,500 Friday at Christie's auction house in Manhattan.

The famed sheet music is one of 11 known first edition copies of Francis Scott Key's patriotic tune, said to be written after he witnessed the British naval bombardment of Fort McHenry during the War of 1812.

The iconic manuscript was sold to a telephone bidder, who was not immediately named.

Key, then a young lawyer and amateur poet, is said to have boarded a truce vessel in the Chesapeake Bay in an effort to negotiate the release of a detained American doctor, according to documents from the Smithsonian National Museum of American History.

But Key was himself detained overnight by Royal navy officials to ensure their plans for the assault on the fort were not revealed to its defenders. His vantage point aboard the British ship is said to have offered sweeping views of the ensuing battle, spanning the night of September 13 to the morning of September 14, 1814.

Cigarette sales in the US last year rose for the first time in two decades, a new report from the Federal Trade Comâ€twitter.com/i/web/status/1â€¦6i
cnni

4:02 pm ET October 27, 2021 RETWEET
Scientists may have detected signs of a planet transiting a star outside of the Milky Way, in what could be the firâ€twitter.com/i/web/status/1â€¦fF
cnni

3:08 pm ET October 27, 2021 RETWEET
Since their discovery, the ancestry of hundreds of mummified bodies buried in boats in an inhospitable desert regioâ€twitter.com/i/web/status/1â€¦X4
cnni