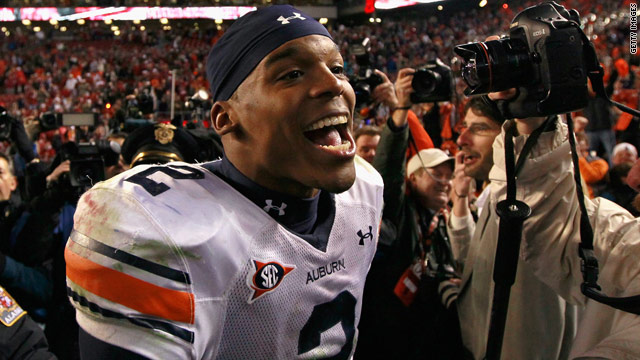 The most talked-about college football scandal in years appears to have been resolved — at least for now.

When Auburn University quarterback Cam Newton takes the field for the SEC title game against South Carolina Saturday, he will have been absolved of any wrongdoing by the NCAA in spite of an investigation concluding his father shopped him around to programs asking for hundreds of thousands of dollars for his son’s signature.

And even though the Heisman hopeful has been cleared to play that game and the BCS National Championship should they win—the Tiger’s success won’t tame the talk. Newton’s story has been a hot topic because it speaks to the heart of many who suspect college athletics are corrupt.

For those who don’t know the Newton story, it all started a month ago when stories about a pay-for-play scandal started surfacing involving Newton and his father, the Rev. Cecil Newton. Here’s a recap of how we got here:

In December of 2009, Cam Newton committed to Auburn after taking recruiting trips there and to Mississippi State.

A month later, Mississippi State claimed it contacted SEC officials to notify of them that Cecil Newton and a booster named Kenny Rogers attempted to get money for Cam Newton’s commitment, a solitication MSU officials said was refused. The school waited six months before fulfilling a request from the league office for more information.

In early November, stories surface alleging Cecil attempted to secure about $180,000 from a Mississippi State booster in a pay-for-play scheme. Auburn refused to comment. The NCAA began its own investigation. As the weeks progressed, another former player echoed the allegations. The FBI questioned Rogers.

Tuesday,  Auburn quietly made Newton ineligible without notifying the media.

Wednesday, the NCAA ruled that Newton’s father and an owner of a scouting service did try to get money for Newton’s signature from MSU. But officials said there wasn’t “sufficient evidence that Cam Newton or anyone from Auburn was aware of this activity,” and no evidence surfaced that the Newtons asked for money from Auburn. ﻿﻿Newton was ruled eligible to play and reinstated.

The announcement set off a firestorm of criticism from bloggers. Even NBA legend and sports commentator Charles Barkley, an Auburn alum, told the "Dan Patrick Show" on  Thursday the ruling was “shaky.”  "I can't explain it, I can't justify it. I can't defend it," Barkley said.

Others echoed Barkley, saying the NCAA had opened a Pandora’s Box, that from now on any would-be college player could ask a school for money through a middle man and there would be no punishment as long as it couldn’t be proven the athlete was directly involved.

The criticism immediately put the NCAA on the defensive. President Mark Emmert said in a statement Wednesday, "We recognize that many people are outraged at the notion that a parent or anyone else could 'shop around' a student-athlete and there would possibly not be repercussions on the student-athlete's eligibility.” Adding the NCAA will "work aggressively with our members to amend our bylaws so that this type of behavior is not a part of intercollegiate athletics."

Newton's father is not the first to ask for money for a kid's commitment. And he likely won't be the last.

The question is this: Will Newton's discovery encourage more bad apples or will it, through awareness, succeed in changing the landscape of a potentially corrupt culture?