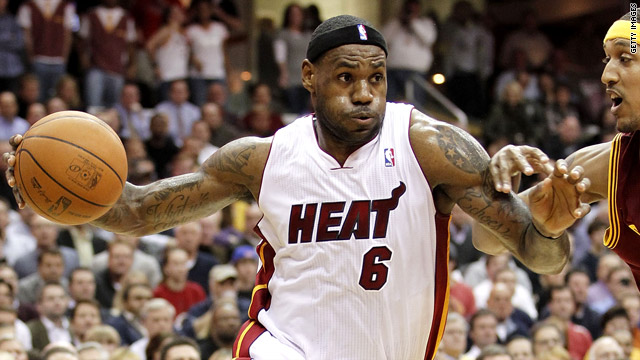 SI.com: The day after LeBron James' return to Cleveland

It’s been five months since LeBron James made his infamous “Decision,” and no one can deny the Heat’s young season is exactly going as planned. especially after Thursday night.

In the most anticipated game of the NBA season, the Heat played arguably its most sound game so far this year, cruising to a 118-90 victory over the Cavaliers.

LeBron’s return to Cleveland was greeted by Cavaliers fans with enough angst to warm the bitter-cold city. Unfortunately for them, LeBron’s night couldn’t have gone much better. From his pre-game rituatl chalk routine – to which he did to no avail – to his season-high 38 points, LeBron shook off the boos and the chants. He played so well he was able to sit out the entire fourth quarter, victory in hand.

Though the superstar could not have asked for a better homecoming given the circumstances, SI.com’s Michael Rosenberg wonders if LeBron realizes what he's missing by having gone to South Beach in chase of titles.

“The Heat may win championships, but their fans will never pack their arena simply to boo,” writes Rosenberg. “The team will never be ingrained in the city's fabric like every Cleveland team is. There are passionate fans in Miami, of course, but not as many... Any town can celebrate championships. Cleveland celebrates heartache.”

Cleveland’s distaste for its lost son has been well chronicled lately, but LeBron stayed positive when speaking about the city’s fan base, which heckled him every time he touched the ball. He said he never held a grudge against Cavaliers fans and that they were never “on his list.”

Rosenberg highlights the many reasons LeBron decided to leave Cleveland for Miami, but concludes the star is chasing hollow victories in a city that will never fully appreciate him like the one he left after his first seven seasons.

“He has left them for a land where there is no winter, for teammates who were stars before he joined them, for fans who care passionately about their basketball team for every bit of the final two minutes of playoff games. Someday, he'll miss those crazy fans and those winter nights. Someday, he'll miss all those witnesses.”

Here’s the action going on around the sporting world (all times Eastern):

Chicago Bulls at Boston Celtics (8:00 p.m., ESPN) Two division-leading foes duke it out in a battle of the Eastern Conference’s finest. Boston has won its last five games and lost only once at home this season. The Bulls are boosted by the return of Carlos Boozer, who is playing in his second game back.

2022 – Year the World Cup will be hosted by Qatar after the United States’ bid for soccer event fell short. SI.com’s Grant Wahl chimes in with a strong opinion on the pick.

8 – Seasons in a row Dale Earnhardt Jr. has been named NASCAR’s most popular driver. Junior is winless over the past two years and finished 21st in the 2010 standings.

2 – Times this season Tiger Woods has led a PGA golf tournament after shooting a 7-under 65 to top the leaderboard at the Chevron World Challenge on Thursday.