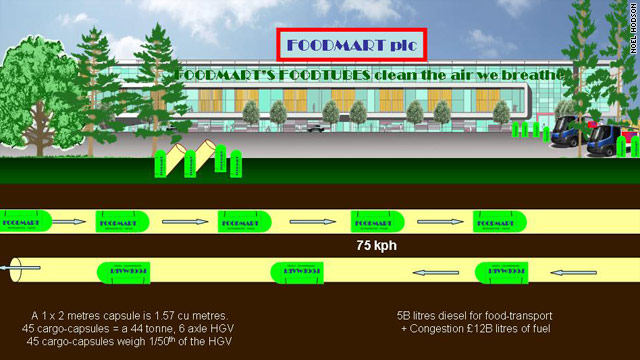 If a UK inventor has his way, food, that most basic of staples, will one day be zipped from the farm to the supermarket like data over the internet.

When you calculate fuel costs and the release of harmful truck emissions, food transportation, over interstate highways and even railroads, wastes time and money, according to Noel Hodson, inventor and coordinator of the Foodtubes Project.

The Foodtubes would transport encapsulated food to â€śterminalsâ€ť at specific stopsÂ - supermarkets, mom and pop stores, etc. - along an underground circuit (pictured above).

The cycle would operate on a â€śgoods in, waste outâ€ť principle, Hodson said in a phone interview Monday with CNN.

â€śOnce it is empty, the capsule would be filled with trash and garbage and sent back for recycling,â€ť Hodson said. â€śThat's why we use the term 'circuit'. The address is like an internet package, and they're tracked by softwareâ€ť for quality control.

The technology behind the capsule propulsion would borrow heavily from the roller coaster industry, Hodson said.

Hodson estimates sellingÂ a food-filled capsule for about $5 (free for empty capsules), adding that the venture would be extremely attractive to food service manufacturers and stores.

The pipelines could be put under major urban areas â€świthout digging up the entire city,â€ť Hodson said. The website Ars Technica has an artist's rendering of a proposed Foodtubes station in London.

â€śIt's most profitable if it's used in a dense, urban environment. It would be quite possible to put a circuit - about 100 miles -Â  probably about 400 entrances and exits on it. And that would serve about 130,000 households, going to the shops that those households use,â€ť Hodson said.

The venture would be financed by a private-public partnership, Hodson said. He said the Foodtubes Project has early interest from the town of Croydon, England, south of London.

The plan has the potential to revamp the entire food service industry, Hodson said.

But would the railroad companies and trucking industry play nice?

7:27 pm ET September 20, 2021 RETWEET
When a full moon occurs near an autumn equinox, like the harvest moon, the moon rises closer to the time of sunset,â€twitter.com/i/web/status/1â€¦Dh
cnni

7:09 pm ET September 20, 2021 RETWEET
The full moon known as the harvest moon will rise this evening, two days before the autumnal equinox this year. cnn.it/3lF3bNA
CNNweather

7:02 pm ET September 20, 2021 RETWEET
The Inspiration4 flight was notable for being the first time SpaceX used one of its Crew Dragon spacecraft, which wâ€twitter.com/i/web/status/1â€¦tm
cnni