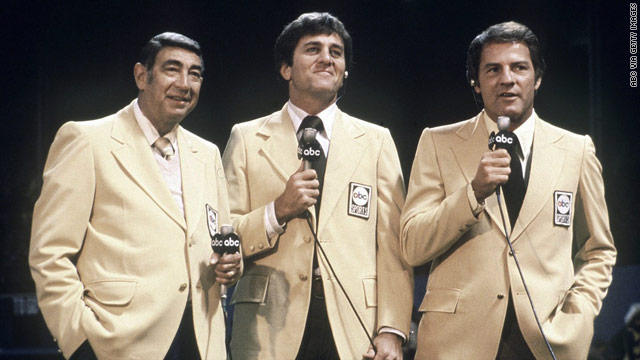 Don Meredith, an all-pro quarterback who made his greatest impact on the game after he finished playing, died Sunday at a Santa Fe, New Mexico, hospital, according to a spokesman. Meredith, above at center, was 72.

The spokesman was unable to confirm the cause of death.

Meredith, nicknamed "Dandy Don," was part of the original Monday Night Football broadcast team when the program debuted on ABC in 1970.

At that time, virtually no NFL games appeared in prime time, and many at the time thought it would fail because - wait for it, wait for it - women who controlled the TV set at night would not want to watch football. (Digital video recorders could have solved a lot during such TV gender wars.)

But in a then-unprecedented three-man broadcast booth, Meredith and Howard Cosell - joined by Keith Jackson the first year and Frank Gifford (above at right) after that - created a broadcast unlike any other.

Cosell (above at left), a former New York lawyer, and Meredith, the Cowboy from Texas, provided commentary and entertainment that attracted football and non-football fans alike. Their success was chronicled in the 1988 book "Monday Night Mayhem."

Meredith left Monday Night Football in 1984, but the series has run for 40 years - first on ABC, and more recently on ESPN. (Both networks are owned by Disney.)

Before entering the broadcast booth, Meredith played college football for Southern Methodist University and eight years for the Dallas Cowboys. He made three Pro Bowls and was the league's player of the year in 1966.

ESPN plans to run a tribute to Meredith and an interview with Meredithâ€™s longtime announcing partner Frank Gifford at halftime of tonightâ€™s Monday Night Football game between the New York Jets and New England Patriots.

"His wit, charm, and strength of personality were matched only by his wonderful leadership, toughness and athletic skill. His persona defined the Cowboys of the 1960s and set the course for what the franchise became. Throughout 50 years of history, the Cowboys legacy has been built by dynamic and colorful personalities who could also compete at the highest level. No one fit that description better than Don Meredith," he said.

"After guiding this team from expansion franchise to title contender, his charismatic style helped build Monday Night Football to a level of popularity that was unprecedented for sports television in America," Jones said in the statement.Â  "Few men have contributed, both on the field and as a broadcaster, to the impact that the NFL currently has on our country today more than Don.

"Our thoughts and prayers are with his family and friends, and his spirit will be with Cowboys players and fans forever."

1:00 pm ET December 1, 2022 RETWEET
No matter how smart or well educated you are, and no matter how successful professionally, when it comes to investiâ€twitter.com/i/web/status/1â€¦ir
cnni

1:00 pm ET December 1, 2022 RETWEET
No matter how smart or well educated you are, and no matter how successful professionally, when it comes to investiâ€twitter.com/i/web/status/1â€¦ir
cnni

Spain boosts security as prime minister targeted in a series of letter bombs, including one that exploded at Madridâ€twitter.com/i/web/status/1â€¦Ky
cnnbrk