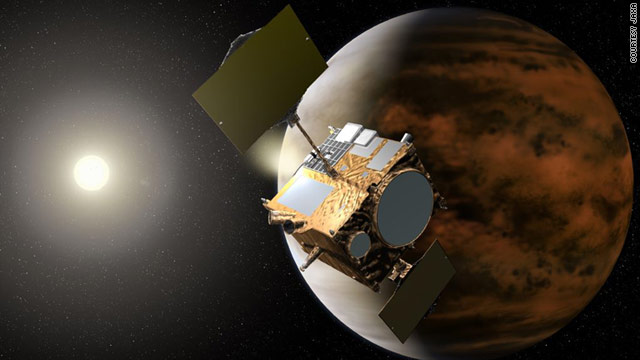 Craft will study weather on Venus

Japan's Akatsuki probe was to enter orbit around Venus on Tuesday to study the planet's weather.

The Japanese space agency had trouble re-establishing communication with the craft after it swung behind the planet, but that problem was resolved, Stephen Clark of Spaceflightnow.com reported.

The agency still hasn't determined whether the probe has settled into the proper orbit, according to Clark.

The spacecraft, which was launched six months ago, is to gather data on a Venusian wind pattern called super-rotation. These winds blow in the same direction the planet rotates but go 60 times faster, according to Takeshi Imamura, the mission's project scientist.

"Akatsuki will investigate why this mysterious phenomenon occurs," Imamura wrote on the website of the Japan Aerospace Exploration Agency, or JAXA.

The refrigerator-sized probe will also study the sulfuric acid that envelops the planet and will look for lightning.

Akatsuki's five cameras will build 3-D images and maps of Venus' atmosphere, the first time that's been done on any planet other than Earth, Imamura wrote.

A near-infrared camera will be able to peer through the murky atmosphere to get a glimpse of the planet's surface.

"In addition to studying meteorological phenomena, we might be able to see whether Venus has any active volcanoes," Imamura wrote.

Akatsuki, whose name means "dawn," will observe Venus for two years, according to JAXA.