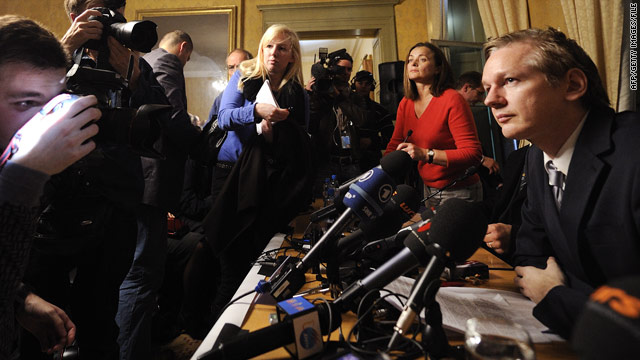 Assange arrested: WikiLeaks founder Julian Assange has been arrested in London on a Swedish warrant. Swedish authorities want to talk to him about sex-crime allegations unrelated to WikiLeaks' recent disclosure of secret U.S. documents. Assange has not been charged.

In court Tuesday, Assange will be able to respond to the arrest warrant, and the court will then have roughly 21 days to decide whether to extradite him, said Mark Ellis, executive director of the International Bar Association.

We're taking a look at what you need to know and what's next for the WikiLeaks founder. Former CIA Director Gen. Michael Hayden asks who's to blame in the whole WikiLeaks imbroglio and what it might mean in the future.

Tax deal reached: The White House will fight Tuesday to get Democrats to support a last-minute deal on taxes that President Barack Obama hammered out with Republican leaders.

The compromise would extend the Bush-era tax cuts for two more years, keeping income tax rates at their current levels for everyone, as Republicans insisted. Obama and other Democrats wanted tax rates to rise only for individuals earning more than $200,000 a year and families making $250,000 or more a year. CNN and CNNMoney.com are taking a look at the cost of the tax deal and what it will mean for you - depending on what bracket you're in.

14-year-old hit man? A teen accused of killings on behalf of a Mexican drug cartel boss is an American citizen, a U.S. State Department spokeswoman says. The boy is 14 and says he's killed four people. The boy faced a battery of questions from reporters after he was detained, answering questions point-blank as camera flashes lit his face.

"I slit their throats," he said, describing what he said was the killing of four people.

Elizabeth Edwards: We're continuing to follow the story of Elizabeth Edwards' battle with cancer after an announcement that her doctors advised her that further cancer treatment would be unproductive. She is instead joining family and friends in her North Carolina home.

"Elizabeth has been advised by her doctors that further treatment of her cancer would be unproductive," the Edwards family said Monday in a statement. "She is resting at home with family and friends and has posted this message to friends on her Facebook page."

China's annual emissions exceeded those of all developed nations combined in 2019, the first time this has happenedâ€twitter.com/i/web/status/1â€¦9f
cnni

6:04 am ET May 8, 2021 RETWEET
Students from the Scandinavian Cello School in Denmark found a unique way to give a concert by performing for cowsâ€twitter.com/i/web/status/1â€¦Th
cnni

5:01 am ET May 8, 2021 RETWEET
Just when you thought you were in the clear to stock up on toilet paper again, wood pulp, the primary raw materialâ€twitter.com/i/web/status/1â€¦tA
cnni

4:01 am ET May 8, 2021 RETWEET
Billions of cicadas will soon appear in the eastern US, the biggest emergence event since 2004â€twitter.com/i/web/status/1â€¦Dz
cnni

3:01 am ET May 8, 2021 RETWEET
Private equity firms, which buy and restructure businesses in hopes of turning a profit, stand at the vanguard of sâ€twitter.com/i/web/status/1â€¦Dt
cnni