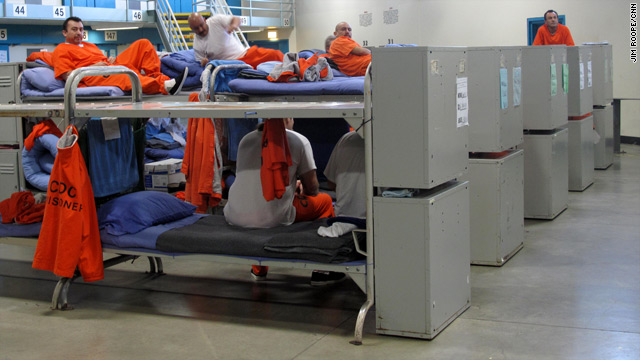 What used to be a gymnasium is now a housing unit for 150 inmates. Bunk beds are arranged in the center of the gym floor. Inmates have to turn sideways to walk between the bunks.

The gymnasium is one of two being used as housing units at the California State Prison in Los Angeles County. There are also two day rooms used for "nontraditional" beds at the facility.Â In all, there are about 450 inmates without cells.

The rest of the prison's 4,500 inmates share cells at a facility designed to hold 2,300. Corrections officer Lt. Michael Stratman says the prison is just under 200% capacity, which increases the potential for violence.

But that's not the basis of a U.S. Supreme Court case that may result in the high court forcing California to release 40,000 inmates to reduce crowding. The case is about health conditions.

Attorney Don Specter argued before the U.S. Supreme Court that with so many prisoners, there isn't adequate physical and mental health care and the inmates are living in less than humane conditions.

The high court is set to decide whether to uphold a lower court's decision forcing the reduction.

State Department of Corrections spokeswoman Terry Thornton said efforts have been made to reduce the prison population since its peak in 2007, mostly through parole. Thornton said the state doesn't need the high court's help reducing the number of prisoners.

CNN Radio's Jim Roope visited the California State Prison to see the conditions for himself.

Listen to the complete story by clicking the audio button:

â€śThe Lord of the Rings: The Rings of Powerâ€ť will be released on Amazon Prime in early Septemcnn.it/3tHSEXEAnpT
cnni

3:00 pm ET January 19, 2022 RETWEET
Inside sled dog racing, the forgotten Olympic sport "You suddenly find yourself getting wrapped around a tree, andâ€twitter.com/i/web/status/1â€¦Sh
cnni