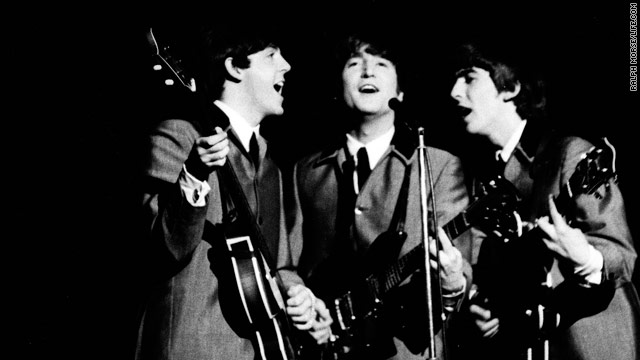 There was one thing, however, he never could have imagined: how the world would come together, distraught, while learning the news of his death. In fact, in his last interview before his murder, his comments were tragically ironic. In a December 5, 1980,┬Āinterview for Rolling Stone, he complained about critics who he said were only interested in "dead heroes," something he had no desire to be, saying that he had "plenty of time" to accomplish some of his life goals.

"These critics with the illusions they've created about artists┬Ā- it's like idol worship," he told the magazine. "They only like people when they're on their way up. ŌĆ” I cannot be on the way up again.

"What they want is dead heroes, like Sid Vicious and James Dean. I'm not interested in being a dead (expletive) hero. ... ┬ĀSo forget 'em, forget 'em."

During "Monday Night Football," Howard Cosell told Frank Gifford - off the air - that Lennon was dead. And in an ESPN video the two discuss how - and whether they should break the news to fans.

CNN's John Roberts, then a music journalist for City TV in Toronto, writes of the day, "It was one of those moments where time seems to slow down and the mind considers a hundred questions before finally settling on the truth: How could he have been shot? Are the reports mistaken? Who would do such a thing? How could we lose such a pop culture icon? Didn't he just turn 40? Didn't he have a young son? Didn't he have security?

"Will I wake up and this will all have been just a dream?"

Like Roberts, a few journalists shared their recollections of that fateful night and the roles they played in the coverage.

Jim Farber, a New York Daily News music critic, was a recent college graduate who was writing the record review column for Circus magazine when ’╗┐Mark David Chapman assassinated Lennon. He recalled hearing people talking about Lennon's death but dismissed it, until he saw the news. So he went to the scene where the music icon was gunned down.

"There were hundreds of people there, and they shut down parts of 72nd┬Ā(Street)┬Ābecause there were so many people there," he said. "It was very emotional, if you could imagine, and I stayed there the whole night wandering around, talking to people and trying to get our heads around what had happened."

Ono, writing a column for The New York Times, however, chooses not to think of the day with unbearable sadness. Instead, she says she remembers the quiet moments she┬Āhad with her husband and reflects on a night they┬Āshared laughter┬Āover a cup of tea.

"They say teenagers laugh at the drop of a hat. Nowadays I see many teenagers sad and angry with each other. John and I were hardly teenagers," she said. " But my memory of us is that we were a couple who laughed."

And she┬Āwrites she hopes his legacy is not just in the words of his music, but in the work he did as well and his hope for peace.

"The most important gift we received from him was not words, but deeds. He believed in Truth, and had dared to speak up. We all knew that he upset certain powerful people with it. But that was John. He couldnŌĆÖt have been any other way," Ono writes. "If he were here now, I think he would still be shouting the truth. Without the truth, there would be no way to achieve world peace."

So today, many fans around the world remember, and will as they gather Wednesday at Central Park's Strawberry Fields,┬Āhow on December 8, 1980, what they couldn't imagine - that the man┬Āwho gave them the words they lived by was gone.

And as he once sang, there are places we all remember.

"All these places had their moments, with lovers and friends, I still can recall. Some are dead and some are living. In my life I've loved them all."

And for Lennon fans, today is one of them. And without a doubt, they've loved every moment he created for them.

5:00 pm ET December 4, 2022 RETWEET
RT @POTUS: I just want to make a few things clear: The Holocaust happened. Hitler was a demonic figure. And instead of giving it aŌĆ”
sarasidnerCNN