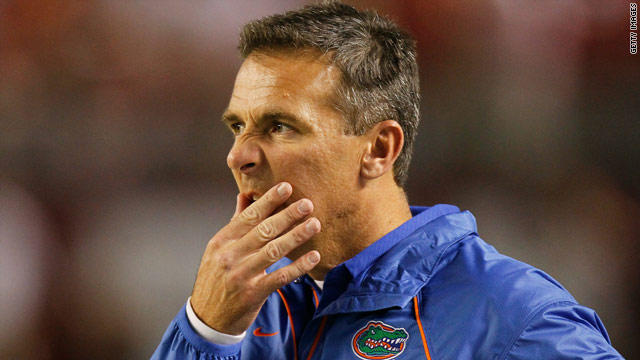 He was named Sporting News and Sports Illustrated “Coach of the Decade” in December of 2009.

Meyer will remain Florida’s head coach through the Outback Bowl in Tampa on New Year’s Day, the school said in a statement.

“I have been a Division I football coach for the last 25 years and, during that time, my primary focus has been helping my teams win titles,” Meyer said.

“I have thoroughly enjoyed every minute of it, and I am a fierce competitor to my core. At this time in my life, however, I appreciate the sacrifices my 24/7 profession has demanded of me, and I know it is time to put my focus on my family and life away from the field. The decision to step down was a difficult one.

“But after spending more than two decades motivating and celebrating the young men I’ve been so proud to coach, I relish the opportunity to cheer for my three terrific kids as they compete in their own respective sports. I know how fortunate I am to be in a position to make this choice and to have a family that is as loving and supportive as my amazing wife and children have always been.”

Last December, Meyer announced that he was stepping down due to health concerns. But a day later, he reconsidered and said that he would instead take a leave of absence. He returned to his position in time for the 2010 season.